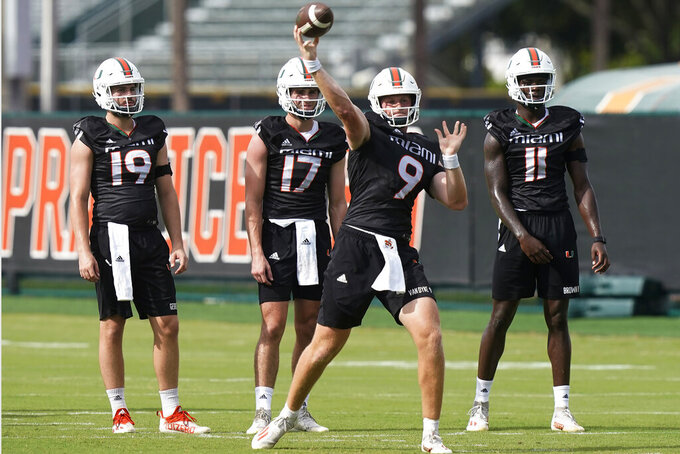 Line: No line, according to FanDuel Sportsbook. Other sites favor Miami by 45.

It’s the first game of the Mario Cristobal coaching era at Miami, as the native son, Hurricanes graduate and former offensive lineman on two national championship teams takes over the program. QB Tyler Van Dyke gets the majority of the Miami buzz, and rightly so, though this game will start to tell who has emerged as his go-to receiver. It’s a big question mark for Miami entering Week 1.

Bethune-Cookman’s speed vs. Miami’s linebackers. The Wildcats are coming off a two-win season and play at the FCS level, but do have plenty of speed on offense. It’ll be a good challenge for a Miami linebacker corps that is largely unproven.

Bethune-Cookman: TE Kemari Averett. He is 6-foot-6, 250 pounds, blessed with good hands and is one of only six players in the last four years to catch two touchdown passes in the same game against Alabama. Averett had those grabs for Louisville against the Crimson Tide in 2018. He is Bethune-Cookman’s best hope in this game, bar none.

Miami: S James Williams. It’s often hard to tell what position he’s playing since he’s all over the place, and that’s a good thing for the Hurricanes. He quickly became a standout for Miami in his debut college season, and Year 2 could see him play an even bigger role.

Miami has won the previous five meetings between the schools by an average score of 46-7. Bethune-Cookman has scored 37 points, total, in those games; Miami has scored at least 38 in each of those contests. ... Van Dyke has thrown for at least 300 yards and three touchdowns in each of his last six games. ... Cristobal is aiming to win three consecutive openers for the first time in his coaching career. ... In his five seasons playing for the Hurricanes (including a redshirt year), Miami appeared in all 83 editions of the AP poll (it was a top 20 when he enrolled, becoming a top 25 in 1989) and never was lower than 10th. ... Bethune-Cookman didn’t play football in 2020. ... The Wildcats have scored first in three of their five previous meetings against the Hurricanes, leading 7-0 in 2011, 7-0 in 2012 and 3-0 in 2017.