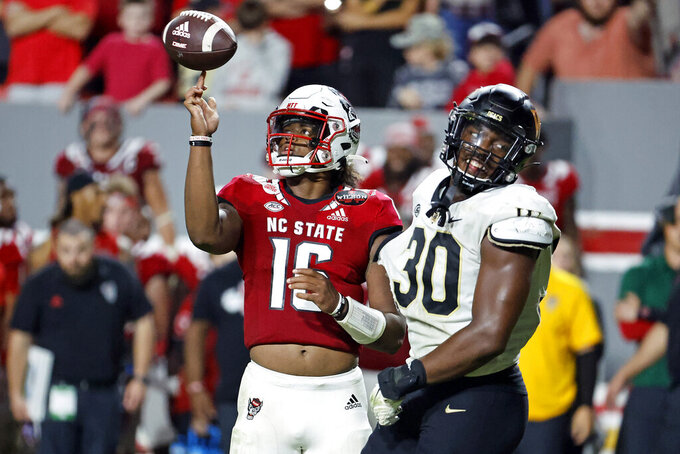 North Carolina State's MJ Morris (16) waits for explanation of a pre snap penalty with Wake Forest's Jasheen Davis (30) nearby during the second half of an NCAA college football game in Raleigh, N.C., Saturday, Nov. 5, 2022. (AP Photo/Karl B DeBlaker)

N.C. State has built some momentum with a first-year passer in MJ Morris, who has stabilized the quarterback position after the season-ending injury to preseason league player of the year Devin Leary. The Wolfpack will close the home schedule seeking a 17th straight win at Carter-Finley Stadium, which would set a program record. The Eagles are trying to break a four-game losing streak.

N.C. State's defense vs. Boston College's offense. The Wolfpack's veteran unit played critical roles both in a comeback to beat Florida State and in last weekend's win against Wake Forest. The unit is surrendering a league-low 17.8 points and is third at 320.3 yards per game. It will represent a challenge for an Eagles offense ranked 12th in the league in scoring (18.8) and 13th in total offense (320.1).

BC: WR Zay Flowers. He had two TD grabs in last week's loss to Duke and is tied for the ACC lead with eight touchdown catches.

N.C. State: WR Darryl Jones. The Maryland graduate transfer came through with a pair of touchdown catches against Wake Forest, providing a glimpse of the receiver play the Wolfpack hadn't seen earlier this year.

N.C. State's 16-game home winning streak has tied the previous mark set from 1972-75 under Lou Holtz. ... Morris threw for three touchdowns in his first start against Wake Forest, marking the first time the program had a true freshman start at QB since Philip Rivers in 2000. ... N.C. State has been in the AP Top 25 for 17 straight polls for the longest run in program history. ... Second-year BC quarterback Emmett Morehead threw for 330 yards and four touchdowns in the Duke loss. He played with Phil Jurkovec sidelined by injury. ... Morehead became the only BC quarterback since Doug Flutie (1981) to throw four TD passes in his first career start. ... Boston College's last victory came Oct. 1 against Louisville (34-33).