No. 18 Fresno State looks to keep it roll going vs Hawaii 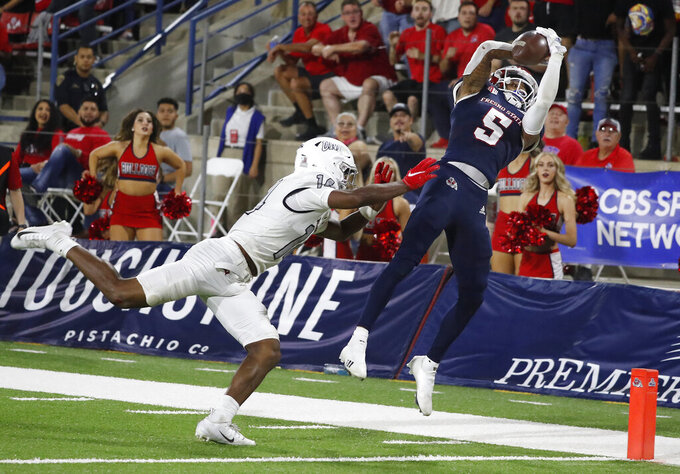 Line: Fresno State by 10 1/2, according to FanDuel Sportsbook.

The Bulldogs moved up four spots to No. 18 following last week’s 38-30 rally over UNLV, which is their highest ranking since finishing the 2018 season in the same spot. Fresno State scored 29 points after halftime against the winless Rebels to pick up its third consecutive win. Hawaii is seeking its first win at home over the Bulldogs since 2009.

Fresno State: WR Jalen Cropper. The junior is coming off his second 100-yard receiving game in as many weeks. After collecting 14 receptions for 141 yards and a touchdown against UCLA, Cropper made 10 catches for 108 yards and four scores versus UNLV. He has scored a touchdown in six consecutive games.

Hawaii: DB Cameron Lockridge. He tallied seven tackles, an interception and recovered a deflected backward pass that he returned for a touchdown against New Mexico State. His 5-yard scoop-and-score was the team’s first defensive TD in 14 games under coach Todd Graham. Lockridge is the nephew of Hall of Fame outfielder Ken Griffey Jr.

Fresno State has won eight of its last 10 meetings against Hawaii and leads the series in Honolulu 15-14. … The Rainbow Warriors have lost their last six games at home against the Bulldogs, who are seeking their first 2-0 start in conference play since 2018. … Hawaii beat Fresno State 34-19 the last time the teams met, in the opener to the 2020 season, which was also its first game under Graham. The Rainbow Warriors racked up 552 total yards in the win, including 323 rushing. … Hawaii is 10-46 all-time against nationally ranked teams, including a 9-26 mark at home. A win over the 18th-ranked Bulldogs would make them the highest ranked opponent to fall against the Rainbow Warriors since No. 17 Boise State in 2007.