No. 18 Oklahoma State, Kansas hopeful about their QB health 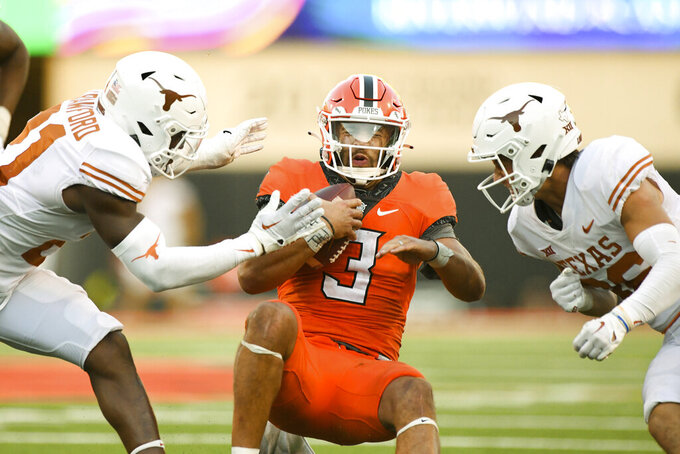 LAWRENCE, Kan. (AP) — Oklahoma State coach Mike Gundy watched from the sideline as Spencer Sanders, his star quarterback, was tackled hard enough on his shoulder during a loss to Kansas State to end up in the injury tent.

Three weeks earlier against TCU, the Jayhawks lost quarterback Jalon Daniels when he was tackled hard on his shoulder, forcing them to turn to Jason Bean with mixed results during what has become a three-game losing streak.

Both starters could be back Saturday.

Gundy said Sanders would mostly rest this week, rather than practice like usual, but “he's doing good” and the No. 18 Cowboys are going to “try to get him back and get him going, just like we've been doing.” Meanwhile, Leipold said Daniels practiced during the Jayhawks' bye week, raising hopes that his dual-threat dynamo would face Oklahoma State.

Even after he was held to 147 yards passing in a 48-0 loss last week to the Wildcats, the versatile Sanders remains second in the Big 12 in yards and touchdowns through the air. He is also second among Big 12 quarterbacks with 343 yards rushing.

“Hopefully Spencer will play," Mike Gundy said, “because obviously that's a different level. But if (not), then we go through the path that maybe you're talking about and we figure it out, we go play and see where it goes.”

The week off could also help the Jayhawks get dynamic defensive back Cobee Bryant back from an ankle injury that he sustained against Oklahoma on Oct. 15. He has two interceptions, including one he returned 86 yards for a touchdown.

Gundy blamed some of the Cowboys' struggles at Kansas State on some changes in practice that he made to deal with a rash of injuries. He didn't describe them in detail, but Gundy said practice would be back to normal this week.

“There’s a lot of different ways to handle this as a coach, different philosophies," he said, "but one consistent philosophy for most coaches is when you show up Saturday you want to have as many guys as you can have. I was a little more concerned than maybe should have been about where we were at from an injury standpoint.”

Deondre Jackson had six carries for 20 yards against the Wildcats, the most work the Texas A&M transfer has had since he arrived at Oklahoma State. Or in his college career, for that matter — he had four carries over the past three seasons.

“It was certainly something we can work with," Gundy said.

The Cowboys are a game behind Kansas State and two back of TCU in the Big 12, and having lost to both, their hopes of playing in the conference title game would likely be dashed by another loss. Kansas is still trying to win a sixth game and become bowl-eligible for the first time since 2008.

The Jayhawks return home for the first time in nearly a month, and much has changed: They were 5-0 heading into their last home game and have now lost three straight, including two on the road. But Leipold is hopeful fans, who had sold out their previous three home games, turn out in big numbers once again on Saturday.

“I hope the future of this program and as we continue to work to build winning consistently in this program, that it’s not undefeated records that get us to fill this place,” Leipold said. "Because that’d be a lot of non-filled stadiums across college football, and I still hope that people are excited and though the wins of late haven’t been there.”