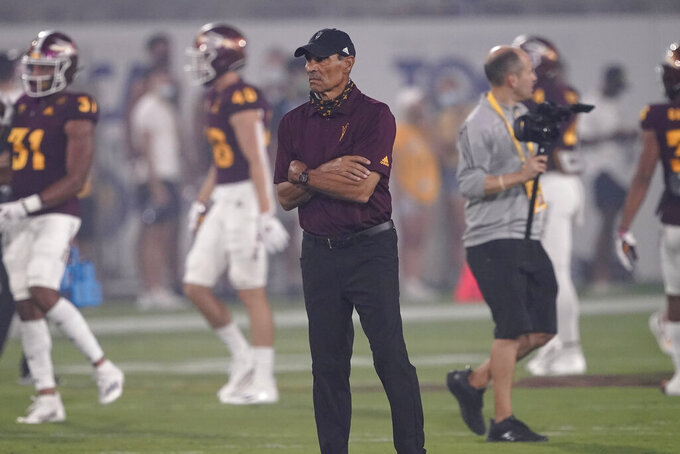 Line: Arizona State by 3½, according to FanDuel Sportsbook.

The Cougars have a chance to go 3-0 against the Pac-12 with wins already at Arizona and against rival Utah. These two teams used to be adversaries in the Western Athletic Conference. The last time they played was Sept. 12, 1998, when BYU beat No. 14 Arizona State 26-6 in Provo. On that Cougars team was a fullback by the name of Kalani Sitake, who ran once and caught a pass. Now the head coach, Sitake and the Cougars are looking to show they'll be a force in a Power Five conference, which they are expected to join in 2023 after accepting a bid from the Big 12.

BYU's offense has yet to turn the ball over this season. The team has won 16 straight when even or ahead in turnover margin. The Sun Devils are opportunistic and have forced 38 turnovers in 13 games dating to 2019. It's the most in the country over that 13-game span.

Arizona State: LB Darien Butler. He has two interceptions and two sacks this season. He's also 12 tackles away from reaching 200 in his career.

BYU: Tyler Allgeier and Lopini Katoa have formed a reliable 1-2 punch out of the backfield. Allgeier has 196 yards rushing and a score, while Katoa has 66. Allgeier finished eighth in the nation last season with 1,130 yards rushing.

The Sun Devils have scored 23 rushing TDs in their last five games. That's the most by any FBS team over the stretch, followed by Kent State (19), Buffalo (18) and TCU (17). ... Arizona State is 5-5 under coach Herm Edwards against AP-ranked opponents. ... Arizona State QB Jayden Daniels is 49 yards passing away from 4,000 for his career. ... The Cougars are 4-2 over their last six games against ranked teams. ... BYU has won 11 straight at LaVell Edwards Stadium. ... The 29 wins over Power Five programs since 2003 are the most of any team not in the Power Five. ... BYU has five TDs and two field goals in seven trips to the red zone. The team is one of 19 teams with seven or more trips into the red zone that remains perfect.