No. 2 Georgia hosts UAB in home opener after beating Clemson 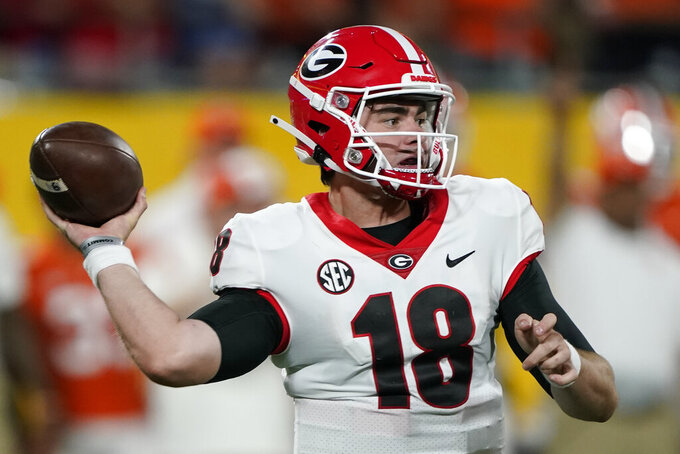 Line: Georgia by 25 1/2, according to FanDuel Sportsbook.

Not much, other than Georgia trying to avoid a letdown after a huge win over Clemson to open the season. The Bulldogs haven't lost to a non-Power Five opponent since a 35-21 setback to Boise State in the 2011 season opener. UAB is 35-16 since reviving its program in 2017 after a two-year shutdown.

Georgia DB Christopher Smith vs. UAB QB Tyler Johnston III. Smith was the Southeastern Conference defensive player of the week after scoring the only touchdown in the 10-3 victory over Clemson with a 74-yard interception return. Johnston threw for 320 yards and two touchdowns in a 31-0 victory over FCS school Jacksonville State.

UAB WR Trea Shropshire: He had 120 yards receiving and a TD in the opener, after accounting for 180 yards vs. Marshall in the final game of 2020.

Georgia QB JT Daniels: Looking to bounce back from a sluggish performance against Clemson, which held him to 135 yards passing and picked off a pass while limiting the Bulldogs offense to a single field goal.

The first meeting between the schools since 2006, when Georgia won 34-0. ... Georgia's defense held Clemson to 180 yards and came up with seven sacks. ... UAB is playing its first four games on the road before moving into its new home, 47,100-seat Protective Stadium, on Oct. 2 against Liberty. The downtown facility replaces historic Legion Field. ... Georgia moved up three spots in this week's Associated Press rankings and now trails only SEC rival Alabama ... After starting his college career at Southern Cal, Daniels is 5-0 as Georgia's starting quarterback. ... Despite a huge surge in COVID-19 cases, Georgia is allowing a capacity crowd of more than 93,000 at Sanford Stadium for the first time since the 2019 season, with no mandates for masks or vaccinations.