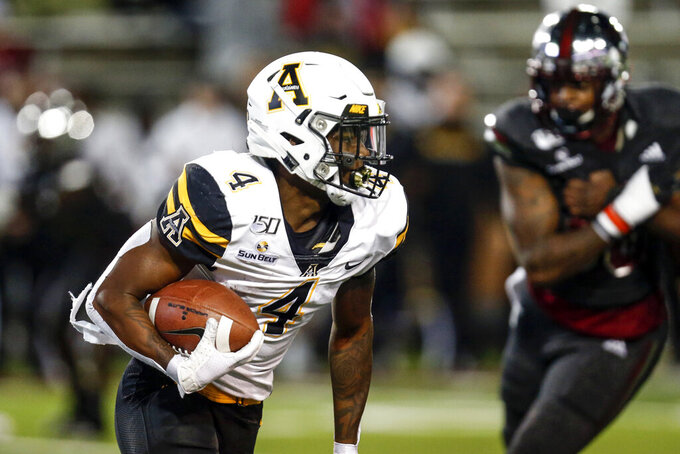 Appalachian State running back Daetrich Harrington (4) carries the ball during the second half of an NCAA college football game against Troy on Friday, Nov. 29, 2019, in Troy, Ala. (AP Photo/Butch Dill)

Appalachian State: Running back Darrynton Evans ran for some 1,400 yards and 17 touchdowns. QB Zac Thomas threw for 2,576 yards and 26 touchdowns.

Appalachian State: The Mountaineers suffered their only loss on Halloween when Georgia State beat them 24-21. They ran the table after that, beating Louisiana 45-38 in the Sun Belt Conference title game.

UAB: The Blazers got off to a 6-1 start this season before dropping two straight on the road, but rebounded to win the Conference USA west division title in the final week. They were trounced by Florida Atlantic in the conference championship game 49-6.

This will be the first meeting of the two teams.

Appalachian State: The Mountaineers are appearing in their fifth consecutive bowl game and have yet to lose. Last year they beat Middle Tennessee State 45-13 in the New Orleans Bowl.

UAB: The Blazers are 1-2 in bowl games, getting their first win last yeas when they beat Northern Illinois 37-13 in the Boca Raton Bowl.