No. 21 Wake Forest gets shot at No. 5 Clemson in ACC tilt 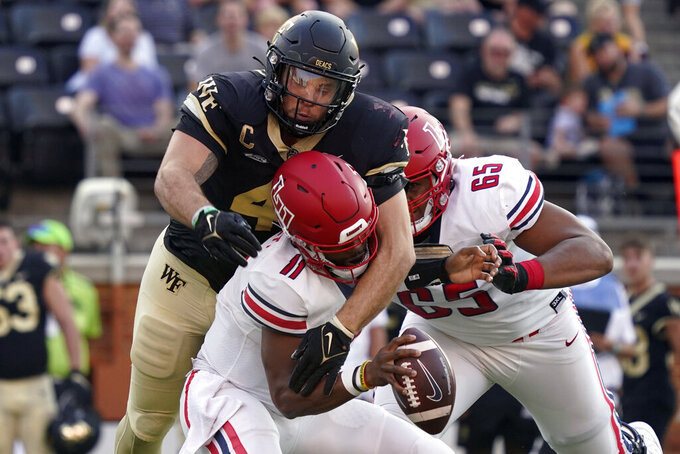 The 21st-ranked Demon Deacons now have another shot at something they haven't done: beating No. 5 Clemson. The teams meet Saturday, and the Demon Deacons are looking to end a 13-year losing streak in the series.

“The bottom line is we haven’t played well against them,” Clawson said. “So I just want to go out Saturday and I want our team to play at the level that we’re capable of.”

“They’re the Atlantic Division champs," Clemson coach Dabo Swinney said. "And they know what that looks like it and they’re confident in that.”

But even last season, with Wake Forest winning 11 games and cracking the top 10 of the AP Top 25 poll, t he Tigers beat the Demon Deacons 48-27 at home in November. In fact, the Demon Deacons have lost by at least 14 points in all but one matchup, with the Tigers since last winning in 2008.

And this starts a critical two-game division stretch for the Tigers, who host No. 12 North Carolina State next week.

Here are things to know about Saturday's Clemson-Wake Forest game:

Defensive tackle Bryan Bresee is expected to return to face No. 21 Wake Forest after missing last week’s win while being home with his family following the death of his 15-year-old sister, Ella, to brain cancer.

He returned to campus this on Monday, then flew back up Tuesday with coach Dabo Swinney and about 40 teammates and staffers for Ella’s funeral. Clemson has celebrated Ella’s life the past two weeks, including a moment of silence for her at Memorial Stadium last week and Swinney coaching in an “Ella Strong” T-shirt.

The Demon Deacons needed to go to the final minute to hold off Liberty 37-36 last weekend at home. Afterward, Clawson sensed his team was so down by the close call that it needed a pick-me-up.

“I told these guys Sunday: We won the game,” Clawson said, adding: "We're not going to walk around here with our head down all depressed after we win. Let's fix the mistakes, know what we didn't do well — but we won.”

And the Winston-Salem-born Henry doesn’t let Swinney forget that it was a loss to Wake Forest in 2008 that led to the ouster of Tommy Bowden and Swinney getting the interim job.

“If my dad doesn’t beat him, he doesn’t get this job,” Henry joked.

Hartman, who missed the opener while being treated for a blood clot, helped the Demon Deacons boast one of the nation's top-scoring and most efficient offenses last season. He has thrown for seven touchdowns and two interceptions in his two appearances this year.

“They’re an RPO team and he knows how to read it and he’s very patient with his reads,” Clemson defensive co-coordinator Mickey Conn said. "So we’ve got to be patient with him.”

After a bumpy first season as the starter last year, Uiagalelei has thrown for five touchdowns with one interception.

Clemson sophomore Payton Page made his first career start with starting defensive tackles Tyler Davis and Bryan Bresee out for the Louisiana Tech. It wouldn’t have happened without Page dropping some 80 pounds from his weight when he arrived on campus in 2021.

Page said he was up to 395 pounds after doing little else other than playing video games and ordering McDonald’s with his North Carolina high school's season canceled due to the COVID-19 pandemic. He has a listed weight of 315 after sticking to the salad options.

“I feel like I’m moving much better,” he said.