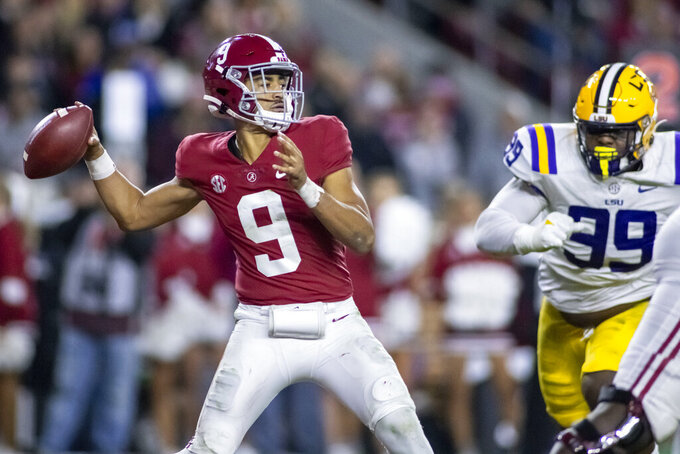 Line: Alabama by 51 1/2, according to FanDuel Sportsbook.

Alabama has plenty of fine-tuning after a struggle against heavy underdog LSU when the running game was all but nonexistent. It's the Crimson Tide's final nonconference game — and biggest mismatch of the season. New Mexico State gets its annual big payday from a Power Five team with a largely new roster after the 2020 fall season was canceled because of the pandemic.

Alabama's secondary against an offense that relies heavily on the passing game. The Aggies only rank 99th in scoring but have the 28th-rated passing offense. Alabama has weathered some injuries in the secondary and at linebacker but has plenty of talent led by Josh Jobe and Jalyn Armour-Davis — presuming they're deemed healthy enough to play in this one.

New Mexico State: LB Chris Ojoh, a transfer from Eastern Washington, leads the team with 45 tackles and 9.0 tackles for loss. He also has five of the Aggies' 14.5 sacks.

Alabama: The offensive line wants some redemption after a game when QB Bryce Young was sacked four times and the running game produced just six yards. That matched the fewest rushing yards for the Tide in a game in records dating to 1940, tying the total in a 1990 loss to Penn State. Center Darrian Dalcourt was listed as day to day with an ankle injury.