No. 4 Clemson getting healthy, more comfortable on defense 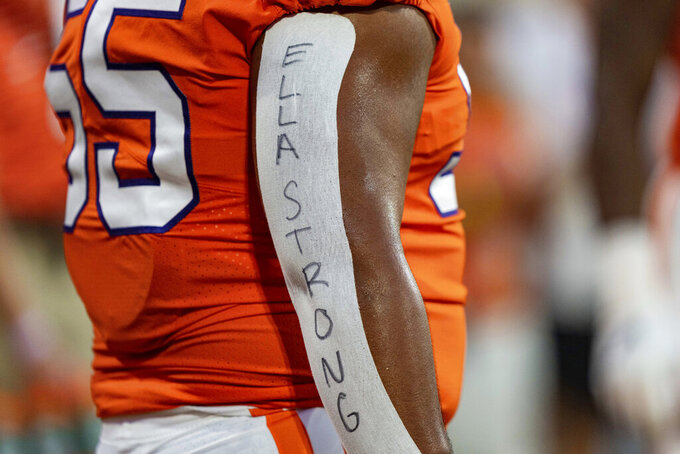 CLEMSON, S.C. (AP) — Fourth-ranked Clemson is finally getting healthy on defense for the first time all season. That promises to be a big problem for opponents going forward.

Starting defensive end Xavier Thomas played his first game of the season for the Tigers (6-0, 4-0 Atlantic Coast Conference) last week at Boston College after breaking a foot bone at an August scrimmage — and had two sacks and a quarterback pressure in only six snaps.

Defensive tackle Bryan Bresee says he's full-go after missing the past two games due to a kidney infection. And the Tigers' secondary will get a boost with the return of Tyler Venables at safety for Florida State on Saturday night.

Swinney said injured cornerback starter Sheridan Jones remains day-to-day, though hopeful he can get back on the field come Saturday.

It's just as major that Clemson has been able to stay perfect with so much turnover on defense. Bresee has missed half of the first six games, the first after the death of 15-year-old sister Ella last month before needing medical tests for his infection.

Three-year starter Tyler Davis missed a pair of games last month and backup Tre Williams only returned last week after several injuries of his own.

The secondary has been a mishmash of young talent without much seasoning, with sophomore Nate Wiggins and freshman Toriano Pride Jr. thrust into action well before they were ready. That was apparent as both got burned — more than once — in the 51-45 double overtime win at No. 14 Wake Forest on Sept. 24.

Both Wiggins and Pride have responded in Clemson victories. Wiggins knocked away the Demon Deacons' fourth-down pass to the end zone on the game's final play. Pride had an interception in a 30-20 win over No. 15 North Carolina State a week later.

Clemson is 24th nationally, allowing 319 yards a game. The Tigers sit second against the run at just 63.7 yards per game.

Clemson coach Dabo Swinney, along with most fans, is eager to see what a healthy group of Tigers can do. And he's grateful it didn't take a defeat to get the attention of his younger players.

“Sometimes you lose before guys grow up,” Swinney said. “We've had to play a lot of guys. I think that will serve up well at some point, but it's nice to get some experienced guys back.”

Especially Thomas, who was considered the country's third-best college recruit when he enrolled at Clemson in 2018. He had speed, strength and an incredible first step that gained him playing time that season on a defensive line with first-round NFL draft picks in Christian Wilkins, Dexter Lawrence and Clelin Ferrell.

But Thomas had fought through injuries and depression during the COVID-19 season in 2020. He was one of Clemson's top performers in preseason camp until he was injured two months ago.

When he saw the X-rays, Thomas broke down in tears in front of trainers. “I thought I was done,” he said.

Instead, rehab and effort brought him back to the field last week. His performance earned him ACC defensive lineman of the week honors. Thomas is excited about what's next. “I'm going to play a lot more this week,” he said.

Clemson's defenders are also growing more comfortable with first-year coordinator Wes Goodwin. Swinney acknowledged that Goodwin is a likable guy who gets along with everyone — great qualities for a person, although not always for a coordinator.

Goodwin said he's faster these days to forcefully point out errors in need of fixing — “More demanding, not demeaning,” he says — and get his players' attention.