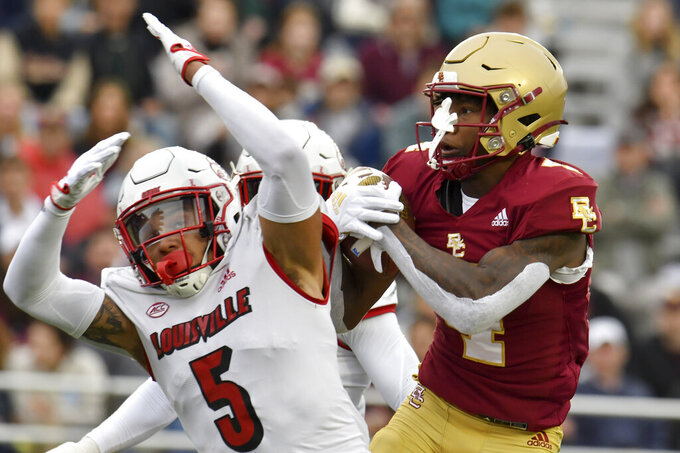 Boston College wide receiver Zay Flowers hauls in a pass despite the attempted breakup by Louisville's Josh Minkins during the first half of an NCAA college football game, Saturday, Oct. 1, 2022, in Boston. (AP Photo/Mark Stockwell)

Line: Clemson by 20.5, according to FanDuel Sportsbook.

If Clemson can avoid hiccups against Boston College and Florida State, it has an open path to the ACC Atlantic Division title and perhaps a spot in the College Football Playoff, with No. 22 Syracuse on Oct. 22 as the last remaining ranked team on the schedule. The matchup is the Red Bandanna Game, scheduled annually by BC to honor former Eagles lacrosse player Welles Crowther, who died on Sept. 11, 2001, helping to rescue others in the World Trade Center.

Clemson secondary vs. BC WR Zay Flowers. Flowers caught five passes for 151 yards against Louisville, including touchdowns of 57 and 69 yards. He also improvised on a broken play and ran for 22 yards to set up another touchdown. The Clemson defensive backfield got a boost when S Andrew Mukuba and CB Sheridan Jones returned to face N.C. State after missing the previous game; CB Malcolm Greene missed back-to-back games.

Clemson: A week after throwing for five touchdowns against Wake Forest, quarterback DJ Uiagalelei passed for two scores and ran for a career-high 73 yards with one TD. He struggled against BC last year, throwing for 207 yards and no touchdowns, but went 30 of 41 for 342 yards and two scores in his first career start in 2020, running in another.

Boston College: Quarterback Phil Jurkovec is coming off his best game of the season, completing 18 of 21 passes for 304 yards and three scores against Louisville. He also scrambled for 33 yards to set up the game-winning field goal.

Clemson has won 13 of the last 14 matchups, with the lone BC win coming in 2010, Dabo Swinney’s second full season in Death Valley. … The Tigers won by six points in each of the past years. … Clemson is one of 16 unbeaten teams in the country. The Tigers are 5-0 for the seventh time in eight years. … Clemson has converted on all 28 trips to the red zone this season. … Clemson’s 11-game win streak is the longest active streak in the nation. … Jurkovec has thrown for 300+ yards eight times, fifth-most in school history. Doug Flutie and Matt Ryan are first, with 12. … Boston College has an all-new offensive line, using eight different players in five different combinations there this season. … BC is 4-4 in the Red Bandanna Game, beating No. 9 Southern California in the first one, in 2014.