No. 5 LSU hosts Utah State in matchup of up-tempo attacks 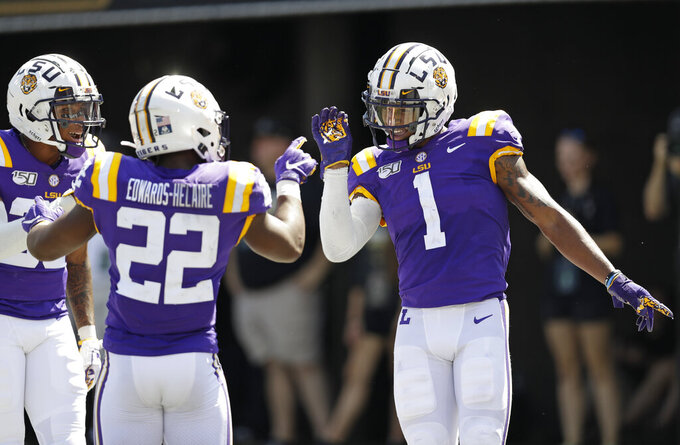 LSU wide receiver Ja'Marr Chase (1) celebrates with running back Clyde Edwards-Helaire (22) after Chase scored a touchdown on a 51-yard pass play against Vanderbilt in the first half of an NCAA college football game Saturday, Sept. 21, 2019, in Nashville, Tenn. (AP Photo/Mark Humphrey)

That'll help on Saturday, when the No 5. Tigers (4-0) kickoff against Utah State (3-1) at 11 a.m. local time to accommodate network television.

"I don't really like sitting in my room waiting for my games," Burrow said when asked if he would have preferred the traditional night start in Death Valley. "I like getting up at 7, 8, eating breakfast and going to play."

LSU's pervious game — at Vanderbilt — also had a late-morning kickoff and was the first daytime kickoff for the Tigers this season. Burrow responded by setting a single-game LSU record with six touchdown passes to go with 398 yards passing in a 68-38 victory .

It also sounds like Burrow has been getting restless after the Tigers got last weekend off.

"I thought would like watching games (last) Saturday, but it's a lot less fun when you're sitting on the couch," he said.

Of course that would be the case for Burrow, who leads an offense that could break all kinds of school records. Burrow already has 100 completions for 1,520 yards and 17 TDs this season, and LSU has scored at least 45 points in each of its first four games for the first time.

Utah State coach Gary Andersen can appreciate an effective spread offense. That's what he's running at Utah State, and he sounds impressed with how Burrow and Co. have flourished in a similar system.

"You're throwing that film on and basically, the offense starts the game and all of sudden it's like 35-0," Andersen said. "They score awful fast. You have to be able to, hopefully, find a way to try and confuse the quarterback a little bit. He's a very talented player."

Utah State has won three straight since losing its opener to still-unbeaten Wake Forest in a 38-35 thriller. But odds makers are still listing the Tigers as more than three-touchdown favorites.

Here's a few other story lines surrounding the Aggies' first visit to Tiger Stadium since 2001:

The forecast, which calls for mostly sunny skies and a high of 93 degrees, could be a factor.

"We're going to practice in 50-degree weather all week long," Andersen said. "Then we're flying to Louisiana with the heat and high humidity.

"That's going to be our challenge — making sure to stay hydrated. We may be used to the heat in August, but we're not now."

"This is our environment," Chaisson said. "I feel like they'll start slowing it down if they can't handle it."

LSU's offense has scored on all 27 possessions that advanced inside opponents' 20-yard line, with 22 TDs and five field goals.

"That was one of the top two or three things we wanted to improve on this year," Burrow said, noting that while LSU's red zone efficiency was good last season, the Tigers too often kicked field goals. "We've changed our mindset that we're going to go for seven."

LSU defensive coordinator Dave Aranda, secondary coach Corey Raymond and safeties coach Bill Busch all previously coached at Utah State under Andersen, who began his second stint as Aggies head coach this year. Aranda also left with Andersen to be his defensive coordinator at Wisconsin in 2013.

Led by QB Jordan Love, Utah State's offense has been averaging 533 yards and 38.5 points per game. Love was intercepted twice last week by Colorado State, but in rainy, windy weather. Love also completed touchdown passes of 37 and 40 yards to help the Aggies top the Rams 34-24 .

"Jordan is our guy, and as he goes, we go," Andersen said. "It's going to be like that, especially with the type of offense we run."

LSU hoped to have more than its 11 sacks through four games. Outside linebacker Andre Anthony, who has one sack, said it's apparent opposing quarterbacks are making a point to not hold the ball for long. He expects to see more of the same this weekend from Utah State's Love, unless the QB chooses to run, as he did 11 times last week.

"Everybody is looking and wondering where our pass rush is, but the ball is getting out so fast," Anthony said. "We've got get a hand in his face and slow them down somehow."