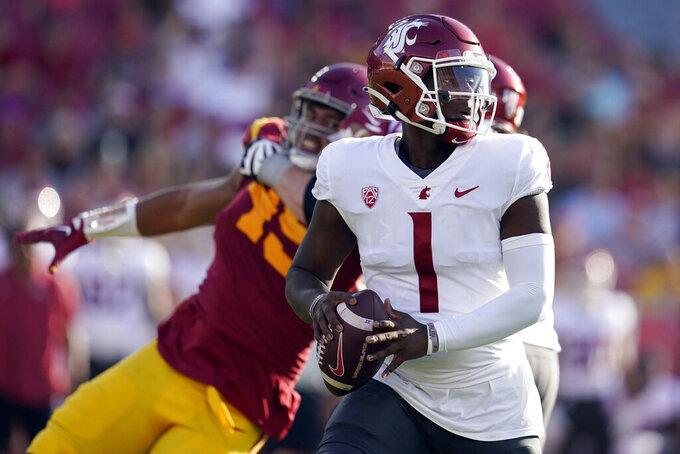 Against high-scoring Washington State, the Trojans' defense showed it can step forward to meet the same standard that's kept USC unbeaten halfway through the regular season.

Caleb Williams threw two touchdown passes to Mario Williams, and No. 6 USC shut out the Cougars in the second half in a 30-14 victory Saturday night.

Travis Dye rushed for 149 yards and a touchdown for the Trojans (6-0, 4-0 Pac-12), who hadn't started a season with six consecutive wins since 2006, near the height of coach Pete Carroll's powerhouse era. Those teams thrived on both sides of the ball, and the current Trojans are showing signs of doing the same, even if neither side is consistent yet.

The defensive numbers were impressive in this one: USC held Washington State scoreless for the final 43 minutes, stopping the Cougars (4-2, 1-2) on seven straight drives to end the game.

“The battle, the grind, the willingness to do the hard stuff, and the way we responded, all of it is very encouraging,” USC defensive coordinator Alex Grinch said.

USC even persevered through the absence of two defensive leaders: Top linebacker Shane Lee sat out with an injury, and top safety Calen Bullock was ejected on a targeting call decided by video review in the second quarter.

“When you lose two of our best players, two of your leaders, you've got to have everybody step up,” Riley said. “We had a lot of guys step up. The defensive front had a dominant game.”

Although USC’s defense somehow didn’t add to its 15 takeaways this season, the Trojans impressively shut down an opponent that had scored 107 points in its previous three games. Tuli Tuipulotu had three of the Trojans’ five sacks.

Caleb Williams went only 15 of 29 for 188 yards, but made big throws when necessary in an up-and-down performance. The Trojans didn’t need their quarterback to be brilliant this time, with Dye and the offensive line doing much of the damage in a workmanlike second half.

Cameron Ward passed for 172 yards while hitting Robert Ferrel and Nakia Watson for touchdowns for the Cougars, who remained winless at the Coliseum since 2013 with their lowest-scoring performance of the season.

“(The Washington State defense) allowed us to maintain some momentum, but it wasn't enough to punch it in and finish,” coach Jake Dickert said. “Defensively, we never quit. It could have turned ugly, but they kept us in it.”

Jaylen Jenkins rushed for 130 yards in a breakout performance, but Washington State fell short of its second road victory over a Top 25 team this season when its offense stalled. The Cougars also were crushed by 11 penalties for 106 yards, many of them quite consequential.

“We just didn't have a complete game,” Ward said. “Trying to beat one of top offenses in the country, you can't have a shutout in the second half.”

Mario Williams caught a 38-yard TD pass on USC’s opening drive, but Washington State put together back-to-back long touchdown drives to start the second quarter. Right after Bullock was ejected for his hit on Ferrel on a lightning-quick play, Washington State drove for Watson's go-ahead touchdown catch, putting the Trojans behind at the Coliseum for the first time this season.

USC reclaimed the lead for good shortly before halftime with a penalty-filled drive ending in Dye's 4-yard TD run.

Dye had another TD run wiped out by a penalty in the third quarter before Mario Williams slid into the end zone to snag a pass inches off the grass for his second TD.

Denis Lynch kicked two of his three field goals in the final 9:09 as USC's offense used up most of the clock.

Washington State: The offense bogged down mightily in the second half, and while that's mostly a credit to USC's defense, fans won't like the mix of drops and unsuccessful play calls. The Cougars clearly have talent on offense, and they can do better than this.

USC: The Trojans have very few reasons for complaints, beyond injuries. While the offense took the necessary steps to establish the running game, the defense relied less on turnovers and more on solid overall play, which is encouraging as the Trojans head to a showdown with the defending Pac-12 champion Utes.

Biletnikoff Award-winning receiver Jordan Addison left the Trojans’ lineup during the second half with an undisclosed injury, and though he returned to the field, he didn’t add to his three first-half catches.

Bullock wasn't the only player disqualified for targeting: Washington State right guard Grant Stephens was sent off in the second half for a block to the head on a USC defender chasing Ward.

USC won't hurt its ranking at all, and the Cougars are still in the mix to be a contender again in a couple of weeks after finishing just out of the Top 25 last week.

USC: At Utah on Saturday night.