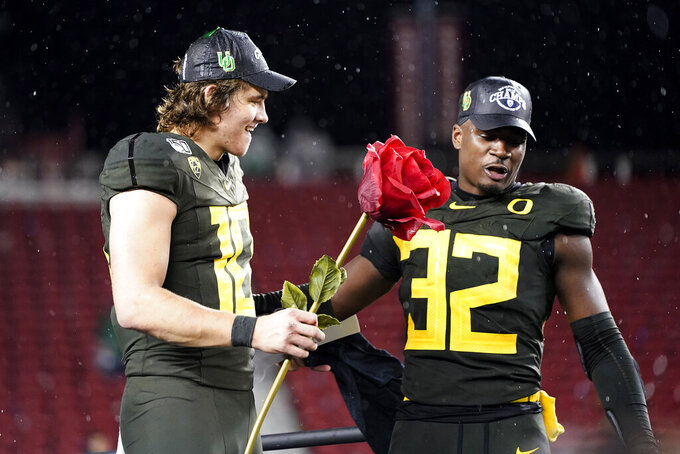 PASADENA, Calif. (AP) — Although Oregon and Wisconsin have been regular visitors to the Rose Bowl over the past decade or so, very few people currently on their rosters or coaching staffs have had the honor of lining up in Pasadena on New Year's Day.

That's just one reason why both of these revitalized powerhouse programs are so excited about yet another trip to the Granddaddy of Them All.

The Badgers are in the Rose Bowl for the fourth time in 10 seasons, albeit the first in seven years, while the Ducks have earned their fourth berth in 11 seasons, but their first in five years.

“Got a group that's never been there players-wise, so that will be an awesome experience for them,” Wisconsin coach Paul Chryst said. “And they get to play against a really, really good Oregon team. It's kind of everything you hope for and dream for.”

This game also is a rematch of the 2012 Rose Bowl. Oregon beat Wisconsin 45-38 in one of the highest-scoring editions of the game, but both programs have undergone wholesale changes since, with multiple coaching staffs coming and going along with the usual player turnover.

"It's an honor to be selected to such a prestigious event that's as good as it gets and as big as it gets in college football," said Oregon coach Mario Cristobal, who made the Rose Bowl two years to the day after he officially replaced Willie Taggart. “Our seniors have gone through a 4-8 season in their freshman year. All the credit in the world to them for staying focused, staying the course and making this a great season for our football team.”

More things to know about New Year's Day in Pasadena:

Oregon earned its spot in Pasadena with a 37-15 victory over Utah in the Pac-12 championship game Friday, extending the Ducks’ strong second season under Cristobal all the way to Pasadena.

The Ducks largely have been outstanding since their season-opening, 27-21 loss to Auburn in Arlington, Texas. They blazed to the Pac-12 North title with relative ease, beating Washington and Southern California on the road on the way to their school’s best regular season record since that run to the Rose Bowl five years ago.

Only a curiously tepid performance in a 31-28 road loss to Arizona State on Nov. 23 prevented the Ducks from being in the playoff conversation, but they proved their worthiness for Pasadena by knocking off the higher-ranked Utes in the conference title game.

“We're still getting better,” Cristobal said. “They've invested a lot. The players are really committed. A really unique group of guys (with) just great DNA. Really made of the right stuff."

Cristobal has a Pac-12 title and a Rose Bowl berth in just his second season in charge of the Ducks, whose previous successes under Chip Kelly and Mark Helfrich have been extended by the former offensive line coach who took over the program when Taggart bolted for Florida State.

Wisconsin edged out Penn State for the Big Ten’s berth in Pasadena despite the Badgers’ 34-21 loss to Ohio State in the conference title game Saturday night. The Badgers and the Nittany Lions finished with the same regular season record, and Wisconsin gave a tough game to the playoff-bound Buckeyes before falling in the second half.

Wisconsin started 6-0 this season before back-to-back losses to Illinois and Ohio State knocked it out of the national title picture. The Badgers rebounded with four straight wins, including a 38-17 road thrashing of Minnesota last week to earn the division title.

“What I appreciate from our group is we've got really good upper-class leadership, and they just kind of took from (the losses),” Chryst said. I don't want to say lessons learned, but they did make important decisions to focus on every game and appreciate it for what it is and play out the season."

The Badgers are in Pasadena for the first time under Chryst, who took over in 2015 and quickly restored a measure of the steady excellence to which Bucky fans had become accustomed under Barry Alvarez. Chryst has won three conference division championships in five season, earning trips to the Cotton and Orange bowls after the previous two.

Both teams boast top-end offensive talent behind two of the nation's most powerful offensive lines, which seems right at home in the Rose Bowl.

Running back Jonathan Taylor vowed to play in Wisconsin's bowl game right after he rushed for 148 yards and one touchdown in the Big Ten title game. He is the seventh player in FBS history to reach 6,000 career yards rushing, joining Ron Dayne to leave Wisconsin as the only program with two backs to hit the milestone. Taylor is expected to enter the NFL draft after the Rose Bowl.

Oregon quarterback Justin Herbert will close out his stellar four-year career with his first Rose Bowl appearance. The Eugene native will be a top NFL prospect after a career in which he trails only Marcus Mariota in yards passing and touchdown passes in Ducks history.

Oregon has reached the Rose Bowl four times in the past 11 years under three coaches, winning in two of those first three trips. The Ducks won the Pac-12 title for the first time in five years by beating Utah on Friday, and they are back in Pasadena for the first time since that 2014 season, when Mariota propelled Oregon to a 59-20 thrashing of Florida State and a subsequent spot in the national championship game.