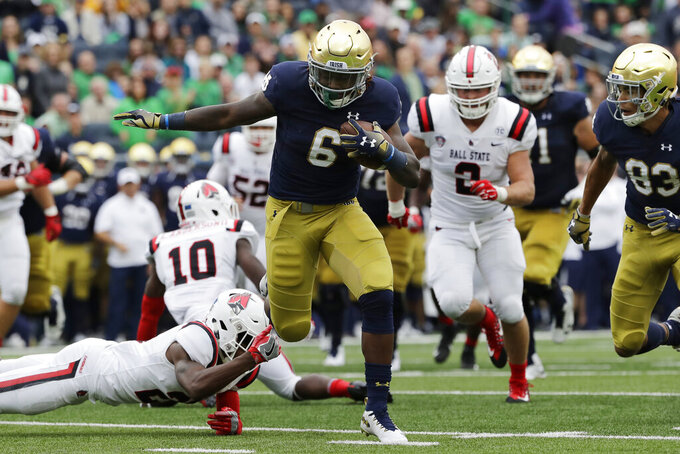 Notre Dame begins its quest for another berth in the College Football Playoff after losing last season to eventual national champion Clemson. The Fighting Irish also aim to even the series after losing 31-28 to the Cardinals in South Bend, Indiana, on Nov. 22, 2014. Louisville begins the uphill climb from its worst finish since 1997 under first-year coach Scott Satterfield, who built one of the nation's top offenses at Appalachian State.

Notre Dame quarterback Ian Book vs. Louisville's defense. Book is a dual threat who completed 68% of his passes for 2,628 yards and 19 touchdowns. He also rushed for 280 yards with four scores. Book will challenge a 3-4 defense that yielded 44.1 points and 483.4 yards per game last season. The Cardinals return seven defensive starters, but will break in a new system with several players in different spots.

Notre Dame: FS Alohi Gilman. The senior returns as the Irish's top tackler with 95 stops last season, including 18 against Clemson. The former Navy transfer also had two interceptions and three tackles for loss.

Louisville: QB Jawon Pass. The junior begins his second consecutive opener as the starter in search of consistency and success after bouncing in and out of the lineup last season. He completed 54% of his passes for 1,960 yards and eight TDs as a sophomore but also threw 12 interceptions.