No. 9 Oklahoma State heads to No. 22 Kansas State 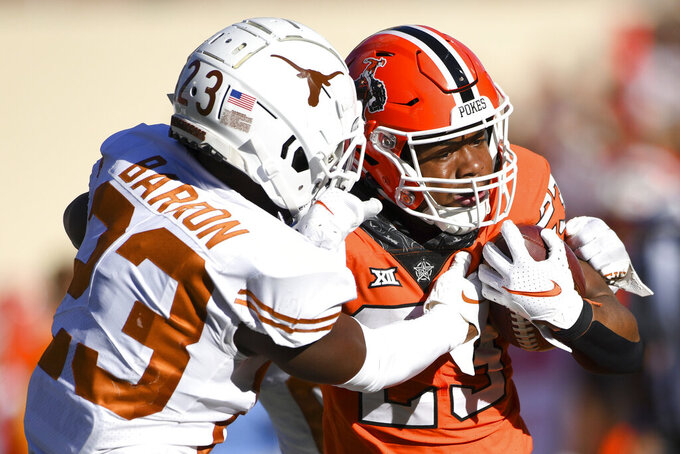 Line: Oklahoma State by 1 1/2, according to FanDuel Sportsbook.

The winner keeps pace behind No. 7 TCU, which has beaten both the Cowboys and Wildcats in consecutive weeks, for the second-place spot in the Big 12. If the season ended next week, that would get the winner into the conference championship game with another shot at the Horned Frogs. The loser would face an uphill climb to get to Dallas because it would drop the head-to-head tiebreaker along with falling a game behind in the conference race.

Oklahoma State QB Spencer Sanders against the Kansas State pass defense, which allowed the Horned Frogs' Max Duggan to throw for 280 yards and three scores last week. Sanders was 34 of 57 for 391 yards with a couple of touchdown tosses and an interception in last week's come-from-behind 41-34 victory over Texas.

Oklahoma State: WR Bryson Green had five catches for 133 yards and a score against the Longhorns, including the go-ahead 41-yarder with 3:09 left in the game. He has 21 catches for 417 yards and five TDs on the season.

Kansas State: Whoever is playing QB. Adrian Martinez barely played against TCU before leaving with an injury, and his status remained up in the air this week. Will Howard played most of the way against the Horned Frogs and would probably start in Martinez's place, though he also left briefly at TCU with a shoulder injury. Jake Rubley is the No. 3 option.

Oklahoma State has won three straight in the series. ... The Cowboys are No. 1 in the Football Bowl Subdivision in fewest penalties with 27 through seven games. ... Oklahoma State is third nationally in scoring at 44.7 points per game. ... Sanders leads the Big 12 with 2,030 yards passing. He has 15 TD passes against four interceptions. ... The Cowboys defense is allowing 25.5% of third down conversions, the fourth-best mark in the FBS. ... Cowboys FS Jason Taylor II leads the Big 12 in solo tackles (42) and interceptions (3). ... The Wildcats have a Big 12-best nine interceptions. ... Martinez and Deuce Vaughn have combined to run for 1,309 yards, making them the leading QB-RB duo in major college football. ... Kansas State is 11th nationally with 232.1 yards rushing per game.