Notre Dame better in Texas, but loses again in semifinals 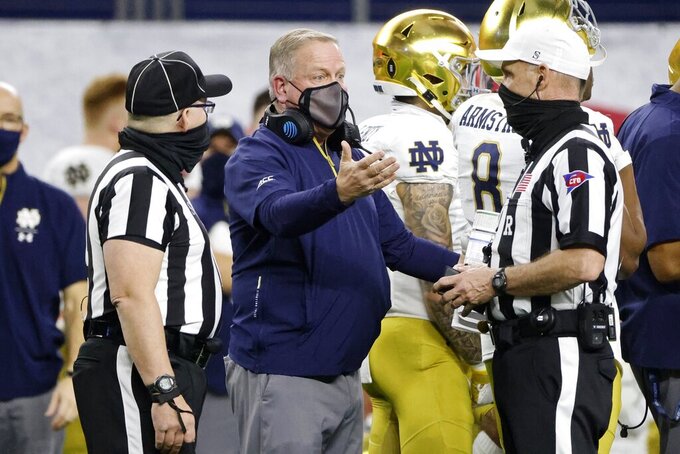 ARLINGTON, Texas (AP) — Ian Book had Notre Dame moving with a chance to get within a touchdown of No. 1 Alabama when his interception shifted the momentum in the second half of their playoff semifinal.

A few plays later, the Irish quarterback was out of the game after 310-pound defensive tackle Christian Barmore fell on top of Book on a 14-yard sack.

The relocated Rose Bowl was a slightly more pleasant trip to Texas for the fourth-ranked Irish than their blowout loss to Clemson in the semifinals two years ago, but the outcome matched six previous trips to the playoffs or New Year's Six bowls since 2000.

Friday's 31-14 loss to the Crimson Tide at the home of the Dallas Cowboys put Notre Dame's average margin of defeat at 23 points in those seven losses, two years after a 30-3 loss to Clemson in the Cotton Bowl in the same stadium.

The game was moved to Texas because of COVID-19 restrictions in California.

Notre Dame (10-2), a three-touchdown underdog, was at least in the game in the third quarter despite Alabama taking a quick 14-0 lead. The Irish were driving down 21-7 when Book thought he had tight end Michael Mayer open as he scrambled.

The underthrown pass was intercepted by Christian Harris, and John Metchie had a 40-yard catch and run on the next play to set up a touchdown.

On the next Irish possession, Book ended up in the medical tent after Barmore's sack, replaced by freshman Drew Pyne. By the time Book got back into the game after the winningest quarterback in the school's storied history missed the rest of that possession, the Irish trailed 31-7.

Book, a graduate student who also lost the semifinal to Clemson two years ago, finished 27 of 39 for 229 yards with another 55 yards rushing and a 1-yard touchdown. Kyren Williams also had a 1-yard score.

“It’s our goal to win a national championship and we didn’t do that,” Book said. “A lot of us are done. It’s up to these guys now. I trust them and I plan on them being back here and I’ll be watching.”

Notre Dame gave up TD drives of 79, 97 and 84 yards on Alabama's first three possessions, none of those marches lasting longer than 2:36.

But the defense was better the rest of the way, making the game feel more competitive than two years earlier when Clemson led 23-3 at halftime in a game that wasn't considered nearly as one-sided as this one coming in.

While there are ways to measure progress for the Irish, the bottom line was a second straight loss to end the season, coming off a 34-10 loss to Clemson in the ACC championship game. Notre Dame beat the Tigers 47-40 in November while Clemson quarterback Trevor Lawrence was sidelined because of a positive COVID-19 test.

“I don’t have a unique problem at Notre Dame,” Kelly said. “I think you need to look at the scores that everybody played against Alabama and Clemson. Everybody’s got the same issue. Everybody can keep saying, you know, Notre Dame is not good enough. You know what? You’re going to have a problem because we’re going to keep winning games and keep getting back here and we’re going to break through.”