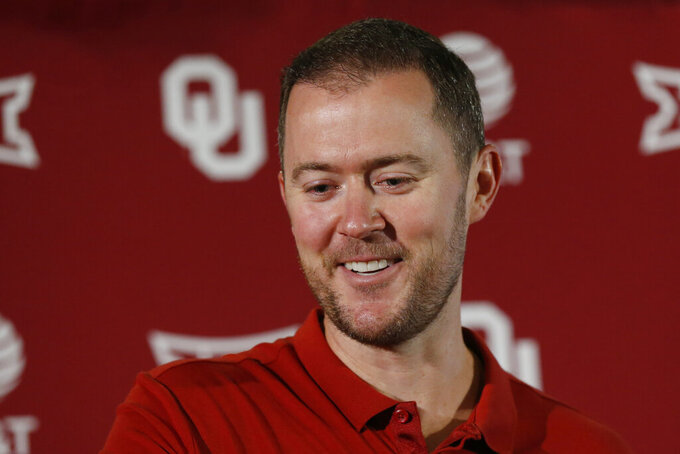 NORMAN, Okla. (AP) — Lincoln Riley could take a few moments to stop and soak it all in.

But that's not how he got so far, so fast.

Riley has accomplished more at age 35 than most coaches do in a career. Barely two years into his run at Oklahoma, he has been to the College Football Playoff twice and coached Heisman-winning quarterbacks Baker Mayfield and Kyler Murray. His salary has already doubled since he took over for Bob Stoops, and his name often is mentioned when NFL jobs become available.

He's not worried about any of it.

"Those things are all well and good, but it's about right now, and this job is always about right now," Riley said. "There will always be time, hopefully a lot later on, to be able to look back, reflect."

Though he's the head coach, Riley still calls the shots for the offense. Last year's unit averaged an FBS-record 8.6 yards per play, and the Sooners reached the national semifinals before losing to Alabama.

But for all he's achieved, Riley hasn't won a national title. And that's hard to overlook at a powerhouse program that hasn't won it all since 2000.

"Our goals are big," Riley said. "We want to continue to grow. As a program, we feel despite some of the good things we've done, we've still got a long way to go. We feel like that, and we're hungry to accept that challenge and keep pushing on."

Riley said he owes it to people around the program to focus on short-term goals rather than letting himself get comfortable. The Sooners will open Sept. 1 against Houston, and that's what has his attention.

"There's so much each day, and you feel like time you could spend being happy about things that have happened in the past or looking back on it is time you're wasting that you could be helping your crew right now."

"He's always looking to be better," Lamb said. "He's trying to instill that in his players. That's what I think he does a great job in. Building up one another and taking it one day at a time.

"That's what I like most about him. The guy doesn't accept average. He's just a winner."

Quarterback Jalen Hurts said Riley balances his knowledge of the game with an ability to relate to young people. Hurts transferred in from Alabama in January, and he said Riley already has built a rapport with him.

"Our relationship has really grown," Hurts said. "You kind of have to force it because of the short time I'm here and how much I have to take in before we get into game play. But it's a relationship I really appreciate. Definitely a different relationship from coaches I've had in the past. But I think that relationship can take us a long way, and I think he can take this team a long way."

Hurts has played in three national championship games, yet Riley hasn't named him the starter over redshirt freshman Tanner Mordecai and five-star true freshman Spencer Rattler. Riley said he prefers to see the situation work itself out during fall camp.

"It's kind of one of those things where, when you know, you know," he said.