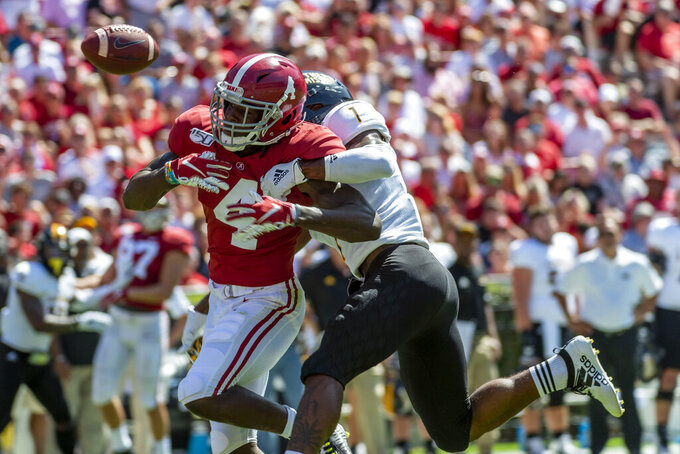 Southern Miss defensive back Rachuan Mitchell (1) knocks away a long pass to Alabama wide receiver Jerry Jeudy (4) during the first half of an NCAA college football game, Saturday, Sept. 21, 2019, in Tuscaloosa, Ala. (AP Photo/Vasha Hunt)

TUSCALOOSA, Ala. (AP) — Mississippi has had to quickly recover and try to put a heartbreaking loss at home to a ranked team.

The last-second loss to No. 15 California still lingers, the Rebels have to turn their attention to second-ranked Alabama — which has yet to be challenged.

That difficult challenge left the Rebels no time for self-pity after losing 28-20 to Cal when backup quarterback John Rhys Plumlee was stopped for no gain at the 1-yard line as time expired.

"I think he scored, but it's time for us to move on and get ready for Alabama," Ole Miss coach Matt Luke said.

That's enough of a challenge for the 38-point underdog Rebels (2-2, 1-0 Southeastern Conference). Alabama (4-0, 1-0) has won each of its game by at least 24 points, including the Crimson Tide's league opener at South Carolina.

With its QB hurting, Ole Miss will try to slow down Alabama quarterback Tua Tagovailoa , who has matched the school record of five touchdown passes in each of the past two games.

Alabama has won the past three meetings but Ole Miss did pull off back-to-back upsets in the 2014 and 2015 games.

Some other things to watch for in this game:

Alabama is having to prepare for two different quarterbacks in case Corral isn't able to go, and Luke is hoping their differing styles makes that harder. Plumlee replaced Corral late and completed all seven of his pass attempts for 82 yards.

"The quarterback's playing really well for them," Saban said. "The backup quarterback came in and played even better in the game last week."

The Rebels are facing the dilemma of every defense against Alabama: How to contain the Tide's receiving foursome of Jerry Jeudy , Henry Ruggs III, DeVonta Smith and Jaylen Waddle. Not to mention tailback Najee Harris, who has three touchdown catches and only one rushing score.

"They are very, very talented and very hard to defend," Luke said. "Obviously, they are really, really fast and get behind you. The thing you see is even on some short routes, they are breaking tackles and scoring. They are hard to tackle in the open field. You have to tackle well against them and limit the big plays and make them earn it all the way down the field."

Tagovailoa has been good at releasing the ball quickly, but Ole Miss has excelled in getting to opposing quarterbacks. The Rebels are second in the SEC averaging three sacks per game. Their average of eight tackles for loss leads the league.

"Their defense has been a lot more aggressive this year in terms of creating negative plays, sacks, tackles for loss," Saban said.

"The plan for every player on our team is the guy's got to beat someone out if he wants to play," the coach said. "I mean, nobody's entitled to play."