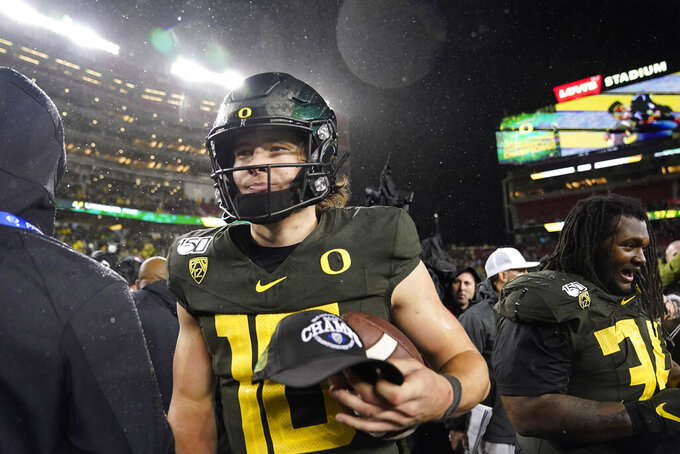 PASADENA, Calif. (AP) — Justin Herbert wasn't dreaming of roses when he decided to return for his senior season at Oregon.

The star quarterback had plenty of reasons for postponing his opportunity to be a probable first-round pick in the NFL draft. The Eugene native adores his school, and he craved another chance to chase the Pac-12 title and a national championship with his teammates and in front of his friends and family.

Herbert got that first Pac-12 championship this month, but the Ducks (11-2) barely missed out on the College Football Playoff. That left Oregon in the Rose Bowl, which loomed for generations as the ultimate reward for a West Coast team's best seasons.

But when asked Monday if he would have been disappointed to never play in the Granddaddy of Them All, Herbert swiftly replied: “No, I don't think I would have.”

Instead, he considers himself fortunate for simply “being around some of the best people in the world” in his last year at Oregon.

“These teammates, they're great, and the coaches, and just the overall experience," he added. "Playing Duck football is everything I've ever wanted to do, and it's a year that I'll never get back in my life. To be around the facility, even to be in the weight room, to be in the cafeteria, it's the best time of my life.”

To be in Pasadena is just a bonus. But Herbert intends to cash it in.

The seventh-ranked Ducks face No. 11 Wisconsin (10-3) on Wednesday in a compelling clash of programs with divergent philosophies but similar successes. Both have reached the Rose Bowl multiple times in the past 11 years, but neither has been back in the past half-decade under its current coaches.

Herbert has no regrets about his decision to stay in school, and his senior numbers are impressive: He has passed for a career-best 3,333 yards with 32 touchdowns and five interceptions. He would need 394 yards in the Rose Bowl to surpass Marcus Mariota's school career record of 10,796.

“I've done everything that I've wanted to do,” he said. “I think this has been the best year of my life, and it's been an experience that I've learned so much."

Oregon's last trip to the Rose Bowl was five years ago, when Mark Helfrich's Ducks obliterated previously unbeaten Florida State 59-20 on their way to the national championship game. Herbert watched that game at home in Eugene with family and friends, marveling at Mariota's 338-yard performance at the controls of the Ducks' fine offensive machine.

Helfrich was Herbert's coach as a freshman, but he was abruptly fired after Oregon went 4-8 in 2016. Herbert was crushed, but he held onto the starting job under new coach Willie Taggart, who left just one year later for Florida State.

When Mario Cristobal took charge two years ago, the coach realized the asset he had in the 6-foot-6 passer who thought he would pursue a baseball career until he excelled early with the Ducks.

Cristobal was grateful when Herbert decided to return for one more year, and he still thinks the decision was wise.

“He became more of a seasoned football player,” Cristobal said. “Now he has complete ownership of the offense. He's a guy that can take over a football game. From a leadership standpoint, he has taken another step as well, which is such a humongous part of one's development. He's established his legacy, and he's not finished yet. He's left an unbelievable impression on those to come behind him.”

The Ducks are averaging 37.5 points in Herbert's 41 career starts. Herbert's arm is strong and accurate, but Cristobal's praise of Herbert's evolution as a leader is echoed by his teammates.

Everybody agrees Herbert has changed dramatically from the shy freshman who would run a play from the wrong side of the field instead of correcting the positioning of running back Royce Freeman, one of his heroes.

“When guys leave here they go into — it seems like it's a shark tank out there when they go on to the NFL,” Cristobal said. “So you have to practice those skills. I don't think people come out of the womb ready to be great leaders of the world.”

Herbert's burgeoning confidence in the huddle and on the practice field will be a significant asset in his NFL career, particularly if he gets to play early. Herbert recognizes his own growth as a leader, and he plans to show it one last time when the Ducks complete their bounce-back season in Pasadena.

“I'm 10 times the player I was last year,” Herbert said. "To be here with the team, and to be in this opportunity, it's awesome and an honor.”