Playoff berths at stake as FCS regular season winds down 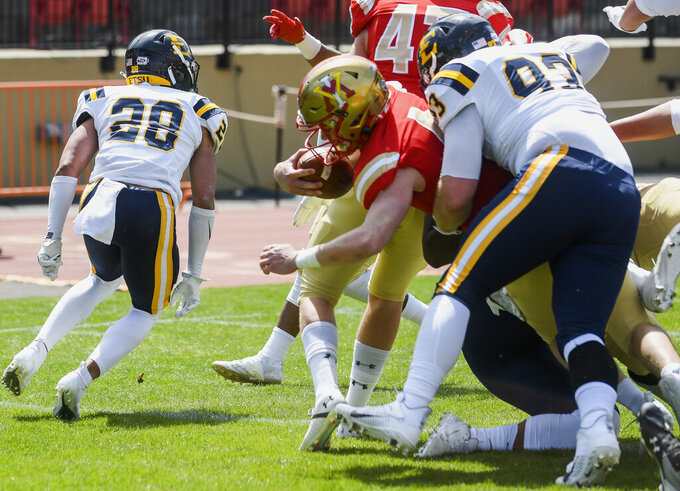 VMI quarterback Seth Morgan (4) crosses the goal line after a two-yard run with East Tennessee State's Max Evans (93) on his back for the first score of the game during the first half of an NCAA college football game Saturday, April 3, 2021, in Lexington, Va. (David Hungate/The Roanoke Times via AP) 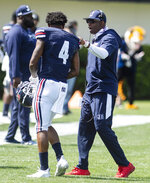 The final weekend for most leagues playing FCS spring football has arrived with 11 of the 16 spots in the pandemic-shortened 16-team playoffs field still to be determined.

Weber State (Big Sky), Monmouth (Big South), Sacred Heart (Northeast), Jacksonville State (Ohio Valley) and Sam Houston (Southland) have already earned automatic berths as conference champions. Top-ranked James Madison and No. 2 North Dakota State have league championships on the line Saturday, though both are likely to be in the field regardless of the outcomes.

James Madison (4-0, 2-0 Colonial Athletic Association) hosts No. 11 Richmond (3-0, 3-0), the third time the teams have been scheduled to play this year. Each program was responsible for one postponement because of COVID-19 protocols.

The Dukes, who have played just once since March 6, need the game to meet the CAA’s three-game requirement to qualify for the conference’s automatic bid; Richmond needs the game to meet the NCAA’s four-game minimum requirement for at-large consideration. Either school, as well as Delaware (4-0, 3-0), which faces Villanova (2-1, 2-1), could wind up as the automatic qualifier from the CAA.

The CAA and Missouri Valley could each get at least two of the six at-large berths, and Eastern Washington (5-1, 5-1 Big Sky) is likely to lay claim to another.

VMI will win the Southern Conference's automatic bid for the first time if it beats The Citadel, or if Mercer loses at Samford. Bucknell and Holy Cross are meeting for the Patriot League title, and Davidson needs only to beat visiting Stetson to claim the Pioneer Football League's automatic berth, which would be the first in Wildcats history.

Deion Sanders probably wished he could have suited up.

Instead, the All Pro cornerback could only watch Alabama A&M quarterback Aqeel Glass light up his Jackson State squad with six TD passes in the Bulldogs' 52-43 victory.

Glass finished with 440 passing yards and also had a 5-yard TD run as the Bulldogs (3-0, 2-0 Southwest Athletic Conference) scored their most points against a Division I opponent in 12 years.

Alabama A&M coach Connell Maynor said having Sanders on the other sideline is "good for Black college football. It's good for Jackson State. It's good for the SWAC.”

Benefits from Sanders' arrival as the Tigers' coach include additional exposure for the league, as well as a sponsorship deal with Pepsi that he helped broker for the SWAC.

"He's making a big splash in a positive way to help generate money for HBCUs and Black college football and the SWAC," Maynor said. “It's only going to help our league.”

Montana is only playing two games this spring, and based on how the first one went, their normal opponents are probably thrilled to have been left off the schedule.

Undeterred by snow flurries and the rust of 485 days without a game, the Grizzlies needed just three minutes to score, amassed 529 yards of offense and got points on eight consecutive possessions in a 59-3 victory against Division II Central Washington.

Montana plays its only other game at home Saturday against Portland State.

Jaylan Adams, quarterback at The Citadel, earned Southern Conference offensive player of the week honors despite not completing a pass. Adams did run for 98 yards, including scoring runs of 25 and 43 yards, in the Bulldogs' 26-7 victory over Furman. His misfired on both of his pass attempts. ... Northwestern State and Incarnate Word combined for two touchdowns and a field goal in the last 88 seconds with Eddie Godina's 32-yard field goal on the final play giving Northwestern State a 49-47 victory. The Demons scored with 1:28 left, but Incarnate Word blocked the extra point and scored 33 seconds later to lead 47-46. Godina's field goal came on the final play of a four-play, 58-yard drive.