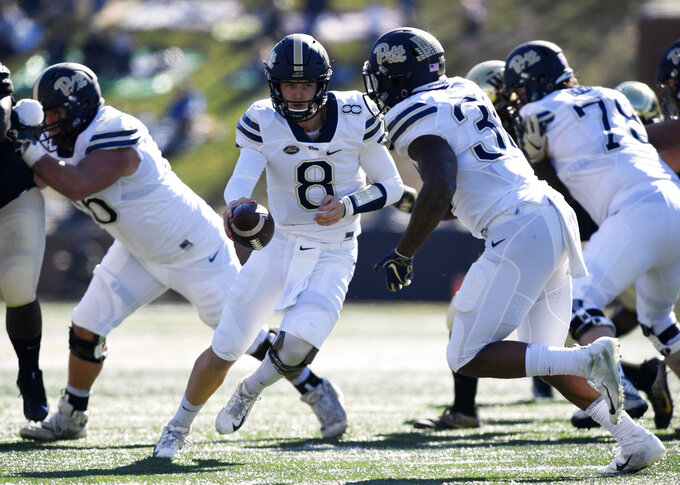 Pittsburgh's Rafael Kenny Picket (8) fakes a hand off to Qadree Ollison (30) against Wake Forest during the first half of their NCAA college football game Saturday, Nov. 17, 2018 in Winston-Salem, N.C. (AP Photo/Woody Marshall) 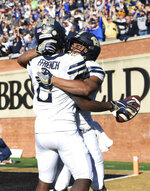 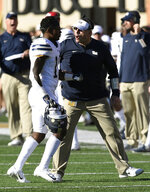 PITTSBURGH (AP) — Pittsburgh coach Pat Narduzzi insists he wasn't making some sort of bold prediction. That he wasn't guaranteeing anything when he told fans at a kickoff luncheon on the eve of the regular season to clear their schedule for a trip to Charlotte for the Atlantic Coast Conference title game on the first Saturday in December because "that's where we're going."

And even as Narduzzi's comments raised eyebrows outside of the locker room, they passed without a ripple on the inside.

For Narduzzi's players, his words were simply the latest in a mindset he has been trying to instill in the Panthers since he accepted the job nearly four years ago: that Pitt has everything it needs to thrive in the ACC.

"We've been preaching about this since day one," senior linebacker Oluwaseun Idowu said. "He sets a high goal and obviously you want to achieve it."

Even if the path the 24th-ranked Panthers (7-4, 6-1) took to their first ACC Coastal Division title — one they wrapped up with a decisive 34-13 win over Wake Forest on Saturday — proved more winding than Narduzzi anticipated.

The team blown off its home field in the second half of a lopsided loss to Penn State, that looked overmatched on the road against Central Florida, that bumbled its way to yet another confounding loss to woeful North Carolina — all in September — will play second-ranked Clemson on Dec. 1 for a shot at the school's first outright conference title regardless of what happens Saturday when the Panthers visit Miami (6-5, 3-4).

Particularly the way Pitt has gone about getting it. The Panthers are a throwback of sorts, relying heavily on senior running backs Qadree Ollison and Darrin Hall and an offensive line that has been dominant at times. What they lack in flash they have made up for in fundamentals and relentlessness.

"Everyone knows this is a special group and everyone showed it every week," quarterback Kenny Pickett said. "We played with a kind of heart and toughness that isn't seen very often in this day and age of football."

The proof came on Oct. 6 against Syracuse. Trailing by three with less than 6 minutes to go and at risk of falling to 2-4, the Panthers didn't shy away from their identity.

If anything, they embraced it.

Eleven straight times Pickett took the snap. Eleven straight times he turned around and handed the ball off to either Ollison or Hall, pushing the ball just deep enough into Orange territory for Alex Kessman to drill a 48-yard field goal to send the game to overtime. Five more snaps in the first extra period produced five more runs and the eventual game-clinching touchdown burst by Hall.

The Panthers have not looked back. Their lone loss during their 5-1 surge that carried them to Charlotte came on the road against unbeaten Notre Dame, a game in which Pitt led until less than 6 minutes remained.

Narduzzi has done his best to find a proper balance between letting his players enjoy the milestone without letting them think they've arrived. His message during the team's weekly film review on Sunday night was succinct. Congratulations on taking a step forward, but none of it will matter if you don't get focused on Miami because "we'll get smacked in the mouth real hard."

Something that hasn't happened in quite a while to a team that revels in its resiliency.

One of the first game-day traditions Narduzzi started was to have his players raise their hands with four fingers in the air and jump up and down at the start of each fourth quarter.

Four seasons in, the hype party has become ingrained. Pitt has outscored opponents 73-29 in the fourth quarter. One of the reasons the giddy celebration over the weekend felt even more joyous was because the Panthers did it in the way Narduzzi promised them they could if they believed.

"It's a really big deal," Idowu said. "We've been preaching it for a very long time now ... all the ups and downs we've been through, it's a big deal."

By Greg Beacham 18 minutes ago
By Ralph D. Russo 3 hrs ago
By Andrew Welsh-Huggins 7 hrs ago
By The Associated Press 8 hrs ago
16 hrs ago