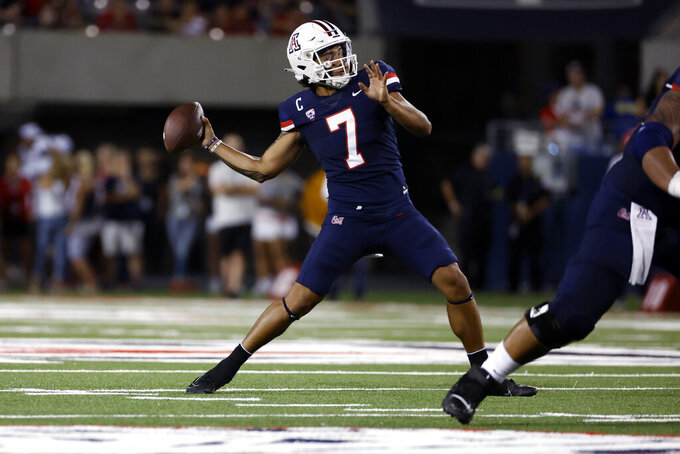 TUCSON, Ariz. (AP) — Will Rogers' receivers failed him three times on Saturday night, twice on fumbles after the catch and once when a catchable ball bounced off Caleb Ducking's hands and right into the hands of a defender.

Even so, Mississippi State's quarterback was unbothered.

“Who cares?" Rogers said. “I'm about to throw the ball right to you again. You gotta go make a play.”

Eventually, the Bulldogs did. Rogers threw for 313 yards and four touchdowns — two each to Austin Williams and Ducking — and Mississippi State beat Arizona 39-17.

It was a strange game for the Bulldogs, who looked like the were going to pull away multiple times before costly turnovers allowed Arizona to stay in the game. Ultimately, the defense was able to limit the damage from those miscues and Mississippi State left Tucson with a deceptively large advantage on the scoreboard.

Both teams finished with three turnovers.

“There were some big errors,” Mississippi State coach Mike Leach said. “They could have been magnified more, except they made big errors as well.”

Rogers finished 39-of-49 passing, completing 15 passes in a row at one point in the second half. Mississippi State finished with 426 total yards, including 106 on the ground.

Mississippi State (2-0) pushed ahead 25-10 early in the third quarter on a 5-yard touchdown pass from Rogers to Williams, capping an eight-play, 75-yard drive. It was one of many times that the Bulldogs clearly had the momentum.

But the Wildcats weren't done, taking advantage of a Mississippi State fumble to pull within 25-17 on the ensuing drive after a 2-yard touchdown pass from Jayden de Laura to Jacob Cowing.

Arizona was driving again later in the third quarter, but de Laura had a pass tipped at the line of scrimmage by Mississippi State's Tyrus Wheat. Teammate Nathaniel Watson plucked the ball out of the air and ran all the way to the Arizona 11. Four plays later, Rogers hit Williams for the pair's second touchdown of the night and a 32-17 lead.

De Laura — a transfer from Washington State — completed 23 of 45 passes for 220 yards, one touchdown and three interceptions.

“I thought we were in the game the whole way through,” Arizona coach Jedd Fisch said. “As we can continue this build, we're going to go through some ebbs and flows. We have a lot of young, a lot of new and we're trying to improve every single day.”

It was the first meeting between the two programs.

Arizona (1-1) won the toss, elected to receive the kickoff, and that offensive confidence was rewarded with a quick touchdown drive. Michael Wiley ran 34 yards down the right sideline to the end zone for a 7-0 lead.

Mississippi State responded with the next 15 points and didn't trail again. The Bulldogs were helped by an ill-advised heave from de Laura, which turned into an interception and a touchdown on the ensuing drive.

Mississippi St: The Bulldogs are a pretty good team when they're not giving the ball to the other team. Leach has his Air Raid offense rolling in his third year in Starkville and the defense made some key plays.

“We’ve got to polish things up, we’ve got to be sharper,” Leach said. ”But guys who play hard and have good effort usually improve, so we've got to make sure we do that."

Arizona: The Wildcats are already much better than last year, when they finished with a 1-11 record. The offense and de Laura are still a work in progress, but it's clear Jedd Fisch has the program in a much better spot in his second year.

In a week of Top 25 upheaval, Mississippi State could come close to breaking into the rankings. The Bulldogs received 10 points in last week's poll.