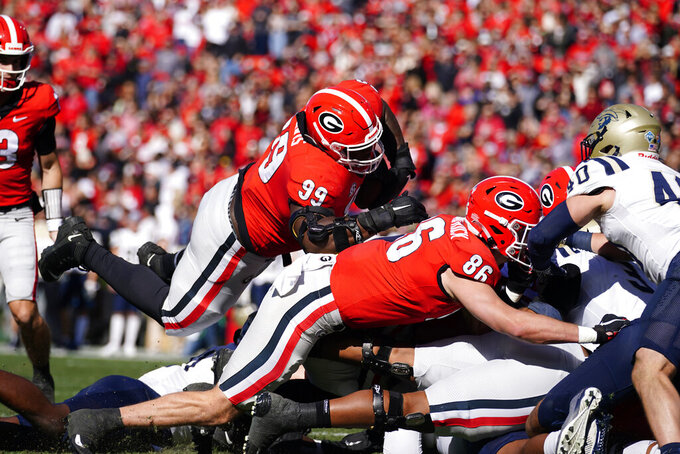 Georgia defensive lineman Jordan Davis (99) dives into the end zone for a touchdown after lining up as a running back in the first half of an NCAA college football game against Charleston Southern, Saturday, Nov. 20, 2021, in Athens, Ga. Georgia lists Davis' weight at 340 pounds. (AP Photo/John Bazemore)

Alabama’s Will Anderson wreaks more havoc in opposing backfields than any college player in the country. Georgia’s Jordan Davis anchors the best defense in college football.

They could well be the best players on the field Saturday in the Southeastern Conference Championship game when No. 1 Georgia meets the fourth-ranked Crimson Tide.

And that’s saying something given the talent level on these teams.

Alabama quarterback Bryce Young has re-emerged as the Heisman Trophy front-runner, according to FanDuel Sportsbook, after leading a comeback, four-overtime win over Auburn.

But Anderson and Davis are getting plenty of acclaim, too.

Anderson is an edge rusher who leads the nation in sacks and tackles for loss for the Tide and has been an outspoken leader. “He’s done as much for our team as anybody ever has,” Alabama coach Nick Saban said.

Davis doesn’t pile up the stats from his position clogging the middle of the nation’s top defense, but he is a huge presence on the Bulldogs’ dominant defense — and even scored a touchdown.

Saban said, whatever the stats, the top thing to look for in an offense is how hard they make it for blockers.

And Davis, he said, “is really hard to block.”

That’s one thing he and Anderson have in common. Otherwise, Anderson is a former five-star recruit at a glamour position. Davis is a space-hogging lineman who only got three stars as a prospect.

Both are among the finalists for the Bronco Nagurski Trophy and Bednarik Award given to the nation's top defensive player.

The 6-foot-4, 243-pound Anderson is the Tide’s most devastating pass rusher since the late Pro Football and College Football Hall of Famer Derrick Thomas. He has 27.5 tackles for loss and 13.5 sacks, corralling Mississippi State’s Will Rogers four times in that game.

Anderson is a five-time SEC defensive player of the week this season. He had seven sacks as a freshman despite not recording one until Game 8.

“He’s a tremendous athlete,” Georgia coach Kirby Smart said. “He plays with so much passion and toughness and energy. When I see him play, he reminds me of (former Alabama linebacker) Rashaan Evans at times before Rashaan moved to inside ’backer. He’s so explosive, twitchy and tough.

“He strikes people and really strikes blocks really well. He’ll be a key part of the game in terms of the way he plays and affects the game.”

The 6-foot-6, 340-pound Davis can hardly be judged on stats alone. His 24 tackles, 3.5 tackles for loss and two sacks hardly tell the story of his impact on the Bulldogs defense.

“I mean, I think the guy is one of the most dominant players in college football,” Saban said.

Davis scored on a 1-yard touchdown run against Charleston Southern and after the game directed the marching band in a rendition of “Glory, Glory.”

Anderson and Davis are studying film of the opposing offenses, but they can't help but pay attention to each other at times.

“He’s a great player. He’s big,” Anderson said. “I think he’s like the unit of their defense, honestly. He’s pretty hard to move around. Just watching him, I feel like he’s a really great athlete for that size and he’s a really good player.”

Says Davis: “He’s a game wrecker, watching his film and just seeing him. He’s explosive. He’s definitely one of those guys you have to make sure to keep contained.”

Both will be focal points of the offenses on Saturday. But defensive standouts will be all over the field.

“This is not a one-man wrecking crew,” Saban said. "This is a really, really good group of players who play well together. There’s multiple players that have ability to make plays.”

But the defenders on both teams also get to take advantage of Anderson and Davis often taking on multiple blockers.

“You’ve got to focus on Will,” To'oTo'o said. “Will’s a monster, and he’s going to get back and cause havoc every single play no matter how many guys are blocking him.”

Davis is capable of the same.