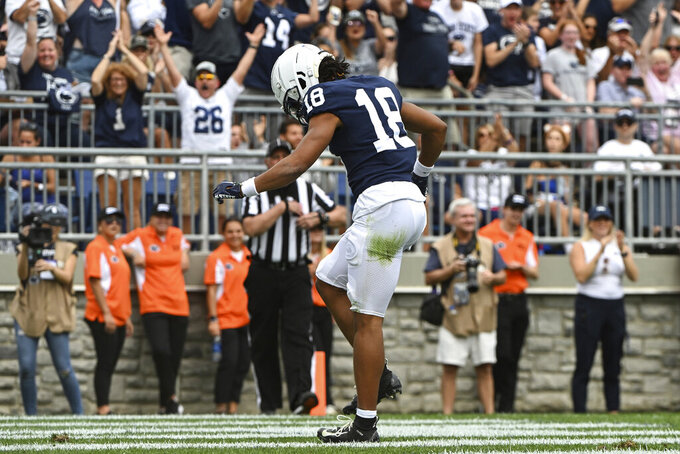 STATE COLLEGE, Pa. (AP) — Before freshman running back Nick Singleton got past the first line of defenders, teammate Ji’Ayir Brown knew he was going to score.

Penn State’s veteran safety bounced up and down on the sideline, pointing toward the end zone just as Singleton slipped through blocks and burst down the sideline for a 70-yard score to spark Penn State’s 46-10 over Ohio on Saturday.

Brown had seen this dash and burn from the former No. 1 recruit before.

“Once he got that edge, nobody was catching him,” Brown said. “I don’t think they were prepared for Nick’s game-breaking speed.”

They’ve been one-dimensional for quite a while, having not had a 100-yard rusher since late in the 2020 season and have regularly finished among the worst rushing offenses in the country.

“He’s explosive, he’s fast, he sees it well,” quarterback Sean Clifford said. “I think it was just a matter of time.”

Singleton carried the ball 10 times for 179 yards, added a 44-yard touchdown in the third and Penn State’s defense dominated the Bobcats.

In between, Clifford and Drew Allar played clean enough and the Nittany Lion defense bore down to force eight punts, a safety and a turnover on downs.

Clifford completed 19-of-27 passes for 213 yards, ran for a score and threw for another as Penn State scored on three of its first five possessions.

The sixth-year quarterback capped a 12-play opening drive with a 1-yard scoring plunge before Singleton dashed down the sideline on the Nittany Lions’ second possession to make it 14-0 late in the first quarter. Clifford threw a 7-yard touchdown pass to Mitchell Tinsley in the third before yielding to Allar.

The Nittany Lions didn’t miss a beat with the freshman running the offense, and more than 107,000 fans who packed Beaver Stadium cheered loudly when he entered.

Allar was 6 of 8 for 88 yards with touchdown passes to Omari Evans and Khalil Dinkins early in the third and fourth quarters.

Trailing 19-0, Sieh Bangura leaned in from 1-yard out to cap an eight-play, 75-yard drive. But the Bobcats didn’t score again until Nathanial Vakos booted a 21-yard field goal with 6:50 to play.

“We came in to win the football game and it didn’t go our way,” Ohio coach Tim Albin said. “As a staff, we need to take 24 hours and get a few guys’ bumps and bruises cleaned up. Next week on the next stage we’re going to look better.”

Ohio: Picked to finish in the lower half of the MAC standings by conference coaches, the Bobcats played hard on defense. They sacked Clifford three times in the first half but couldn’t hang with Penn State’s speed.

Penn State: Offensive coordinator Mike Yurcich has built a solid foundation in the first two weeks. More importantly, the running game came alive in this one as Singleton looked quick bouncing runs outside. A bonus? Fellow freshman back Kaytron Allen looked capable too with seven touches for 45 yards.

Penn State coach James Franklin said the plan was to not only play Clifford and Allar, but third-stringer Christian Veilleux as well.

All three did play and Clifford was adamant afterwards that that was a best case scenario. He enjoyed watching both his understudies play well.

“I want to be out there with my guys as much as possible,” Clifford said. “But the one thing I will say, is if it means giving up some time to get guys prepared, I want to win more than anything. I have no ego in that. And I know how important it is to get those guys reps because if anything happens to me, I want to win games.”