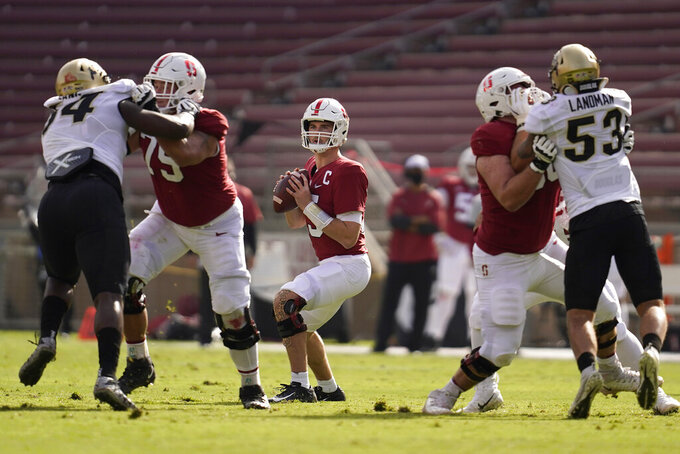 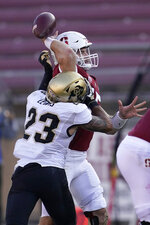 STANFORD, Calif. (AP) — Stanford quarterback Davis Mills had already had as much practice by Tuesday as he did in the entire leadup to a three-point loss to Colorado.

Mills managed to play effectively last Saturday despite only one 45-minute session to get ready for the Buffaloes after a coronavirus testing protocol mistake led to him being held out of the season opener at Oregon. He was quarantined until the conference acknowledged the mistake and cleared Mills and three others.

Not that coach David Shaw has once heard his play-caller complain about what transpired. Mills gets another shot under center Saturday night when the winless Cardinal (0-2) host Washington State (1-1) at Stanford Stadium.

“A lot of credit goes to Davis' family and how he was raised and the kind of person he is. I talked to him on game day, he said, ‘Hey, Coach, there’s nothing we can do about it right now, I'm just wishing my guys success and rooting them on,'” Shaw said. “He and I have a very similar mentality, doesn't have a lot of highs, doesn't have a lot of lows, deals with the situation that's presented."

Mill's 327 yards passing were the second-most of his career, even if the offense struggled to get going until the fourth quarter.

“That's too late in the game,” Mills said. “We need to start sooner. I don't want to blame anything on missed practices, missed opportunities.”

First-year Washington State coach Nick Rolovich is someone Shaw watched from afar when Rolovich coached Hawaii, where he was head coach the past four years.

"One of the things he's really, really good at is utilizing his personnel within his offense," said Shaw, who watched the Hawaii teams launch the ball downfield routinely.

The Cougars get many guys involved.

“They’re giving guys opportunities to make plays,” Shaw said. “There are balls being spread around.”

Mills looks to his own missed chances — a couple of conversion chances he would like back, a couple of throws and he knows there were blocks and catches that could have gone Stanford's way.

Mills is eager for another shot Saturday.

“With one 45-minute practice on Friday, went out and played relatively well,” Shaw said. "I think the rust was there, a couple of things we tried to do but didn’t work. It’s a tough spot to put him in.”

NIGHTTIME ON THE FARM

Stanford is 49-19 playing at night during Shaw's 10 seasons as coach and also 53-13 at Stanford Stadium since the start of the 2010 season, now-Michigan coach Jim Harbaugh's final year before taking over the San Francisco 49ers.

Washington State running back Max Borghi's status remained unclear after the junior sat out injured again for a 49-23 loss to Oregon and Rolovich didn't sound overly optimistic in calling Borghi day to day. Deon McIntosh has played in his place.

No matter who is on the field, Stanford cornerback Kyu Blu Kelly said his team must put a full game together. The Cardinal discussed after losing to Colorado “the reason we aren’t coming out strong, coming out fast in the third quarter.”

Shaw expects Stanford to capitalize on more opportunities in the red zone, and do more with chances coming out of halftime following a poor third quarter. That was largely the difference in the 35-32 loss to Colorado last week.

“We've got to be better on third down,” he said. “We hit spots where we were doing well but overall philosophically and execution-wise we just have to be better.”

The early third quarter often establishes momentum for the rest of the game. Now, Mills hopes the Cardinal can build on how well they played down the stretch against Colorado.

“I think it's another thing we talk about in our sports performance program, starting fast,” he said.

Washington State freshman defensive back Ayden Hector — who had signed with Stanford but had his scholarship rescinded based on his involvement in a police investigation — recovered three Oregon turnovers in the first half, two on fumble recoveries and an interception on the way to Pac-12 freshman of the week honors. But the Cougars were only able to convert those three turnovers into 10 points.

"He got three turnovers in nine plays,’’ Rolovich said. "That doesn’t happen very often. He was Johnny on the spot.’’’

It was the second consecutive week a Cougars player was freshman of the week. Quarterback Jayden de Laura won it the opening week of the season

“It is a good sign,” Rolovich said, "especially for the future."