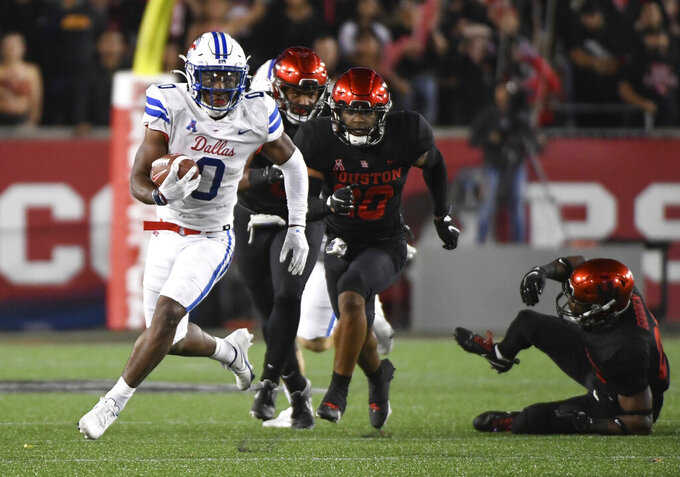 SMU's Bryan Massey (0) returns a kick against Houston during the second half of an NCAA college football game Saturday, Oct. 30, 2021, in Houston. (AP Photo/Justin Rex)

Long kickoff returns came in bunches over the weekend.

Four players ran back kicks 100 yards Saturday, the most in a single day since there were five maximum-distance returns Oct. 31, 2015.

Two occurred in the same game. SMU’s Bryan Massey ran back the second-half kickoff against Houston, and the Cougars’ Marcus Jones went all the way with 17 seconds left to produce his team’s 44-37 win.

The previous time two FBS teams each had a 100-yard kick return was in the Utah-Colorado game in 2012, according to Sportradar.

SMU's Massey has run back two kicks for TDs this season and Houston's Jones has two kick returns and two punt returns for scores.

The other 100-yard kick returns Saturday were by Old Dominion’s LaMareon James, against Louisiana Tech, and Arkansas State’s Alan Lamar, against South Alabama.

Anthony Watkins of Tulsa ran back a kick 97 yards for a touchdown against Navy on Friday.

BYU's Tyler Allgeier turned in the top rushing performance of the weekend, running 29 times for 266 yards against Virginia. It was Allgeier's second 200-yard game of the season.

Missouri's Tyler Badie had his third 200-yard game, going for 254 on 31 carries against Vanderbilt. Syracuse's Sean Tucker had 26 carries for 207 yards against Boston College.

Caleb Williams' six touchdown passes for Oklahoma against Texas Tech were the most by a freshman since Oregon's Justin Herbert threw for the same number against California in 2016.

Williams matched the Oklahoma freshman record set by Landry Jones in 2009. The last Oklahoma QB to throw for six TDs was Kyler Murray in 2018.

Wake Forest remains the only FBS team to have scored at least 35 points in each of its games.

The unbeaten Demon Deacons, who defeated Duke 45-7 Saturday, are averaging 43.4 points per game to rank second in the Atlantic Coast Conference and fifth nationally.

Iowa managed just 156 total yards in its loss at Wisconsin, the Hawkeyes' fewest since they were held to 66 by the Badgers in 2017 and tied for fourth fewest since 2000.

The Hawkeyes' combined 427 yards in their last two games are their fewest in back-to-back games since Wisconsin and Purdue held them to 324 in 2017.