STAT WATCH: Northwestern yet to give up a point in 2nd half 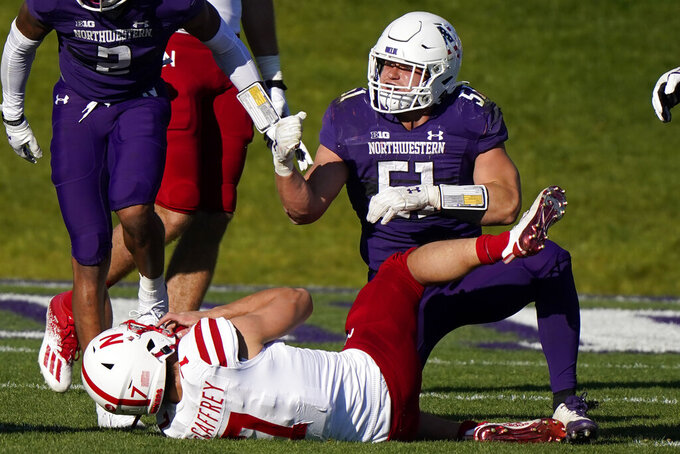 Northwestern is 3-0 for the first time since 2015 largely because of a defense that's yet to give up a point after halftime.

In a 21-13 win over Nebraska on Saturday, the Cornhuskers reached the Northwestern 25, 4 and 14 after half and came away empty each time. Two of those series ended with interceptions and the third on downs.

Northwestern, which made its first appearance of the season in The Associated Press poll at No. 23 Sunday, also has beaten Maryland and Iowa. The Wildcats are the only FBS team that has played more than one game to have shut out each of its opponents in the second half.

Cincinnati's defense is next best after half, allowing 2.6 points against FBS opponents. The Bearcats have been especially tough in the second half the last three weeks, limiting high-scoring SMU to three points and shutting out potent Memphis and Houston offenses.

Jarek Broussard had the most rushing yards by a player in his first game for Colorado, going for 187 yards and three touchdowns in a 48-42 win over UCLA.

The freshman tailback had the third-best rushing day by a player making his starting debut. Mike Pritchard in 1990 and Billy Waddy in 1973 each had over 200 yards in their first starts.

The Sooners also had six quarterback hurries and 11 tackles for loss. They have 20 sacks and 39 TFLs over its last four games.

THE GUY CAN SCORE

North Carolina's Javonte Williams scored four touchdowns in a 56-24 win at Duke and leads the nation with 17 (14 rushing, three receiving).

All of Williams' TDs against Duke came in the first half, making him the first Carolina player since Kelvin Bryant in 1981 to score four times in the first two quarters.

No. 2 Notre Dame has the longest active win streak in the FBS at 13 games.

Which team has the second longest? No. 22 Liberty, which won its ninth in a row with its 38-35 victory at Virginia Tech.

The Flames are 2-0 against ACC opponents — they beat Syracuse three weeks ago — after entering the season 0-8 against the league. Liberty, in its third year in the FBS, is the first non-Power Five team to defeat two ACC opponents in the same season since Houston did it in 2015.