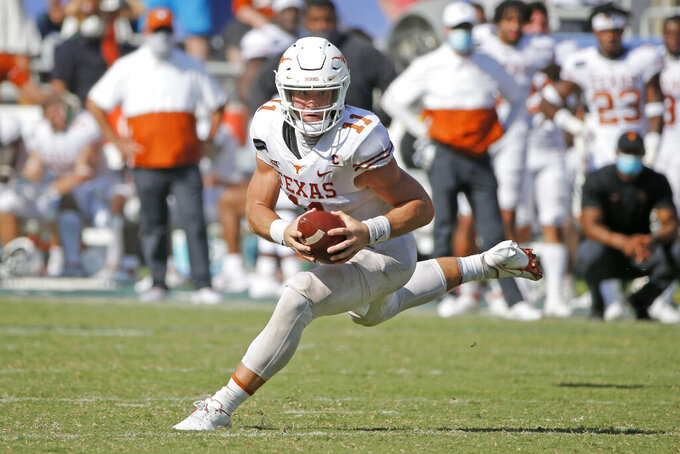 AUSTIN, Texas (AP) — Texas athletic director Chris Del Conte said Wednesday he expects players to “stand together as a unified group” to show appreciation for the school and fans during the playing of the school song “The Eyes of Texas” after games, but didn't say what will happen if they refuse.

The song has become a thorny controversy within the program after several football players and other athletes said over the summer they no longer wanted to sing it because of its uncomfortable connections to racist elements of the school's past, including performances by musicians in blackface decades ago.

Football players skipped the traditional singing of the song after the Longhorns’ first two home games. The issue came up again this week after senior quarterback Sam Ehlinger stayed on the Cotton Bowl field for the song following a loss to Oklahoma.

No other players could be seen with Ehlinger in photos that quickly spread around internet message boards.

Del Conte’s remarks in his weekly message about athletics are the most forceful yet from the administration.

“I have had many conversations with our head coaches outlining my expectations that our teams show appreciation for our university, fans, and supporters by standing together as a unified group for ‘The Eyes,’ while we work through this issue,” Del Conte said.

Del Conte didn't say what will happen if players refuse. Football coach Tom Herman said Monday he would encourage players to join in singing the song, but would respect those who don’t.

Texas players were not expected to be made available for interviews this week. Earlier this season, standout safety Caden Sterns, one of the team captains, said he would not sing the song.

The school has said it won't drop the alma mater but will study its history and develop a full accounting of its past.

"Like all families who see the world through different lenses, we have plenty of work to do on this subject and will continue to do so, but rest assured, our student-athletes love and respect this university very much and are competing their hearts out for it," Del Conte said.