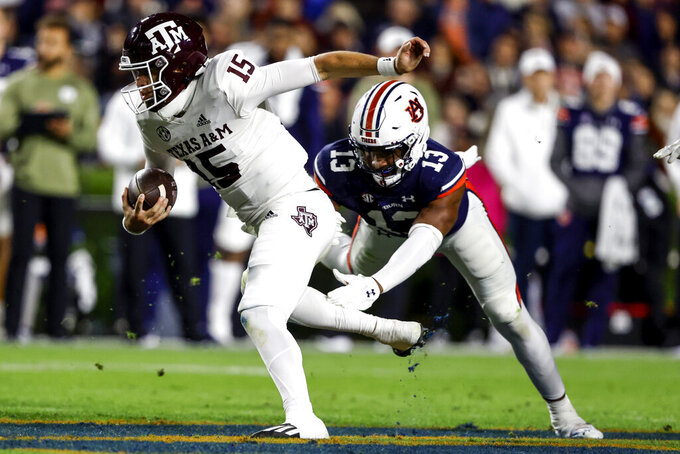 Texas A&M quarterback Conner Weigman (15) is tackled by Auburn linebacker Cam Riley (13) as he scrambles for a first down during the first half of an NCAA college football game, Saturday, Nov. 12, 2022, in Auburn, Ala. (AP Photo/Butch Dill)

Not much is on the line in this matchup of teams having dreadful seasons and without a win since September. The Aggies opened the season ranked No. 6 but have struggled all season and have lost six in a row. They might get their first win since Sept. 24 when they take a break from the rigors of SEC play to host UMass, losers of seven straight. UMass got its only win this season, 20-3, over Stony Brook on Sept. 17.

A&M QB Conner Weigman vs. the UMass secondary. The freshman has been inconsistent since taking over after Haynes King was benched. He threw for just 121 yards in a loss to Auburn last week but should be able to get going against a team that’s allowing 184.5 yards passing a game.

UMass: RB Ellis Merriweather had a season-high 122 yards rushing with two touchdowns in a loss to Arkansas State last week. He leads the team with 479 yards rushing and three scores.

George Johnson III leads the Minutemen with 364 yards receiving. Brady Olson has thrown for 591 yards and two touchdowns this season. … The Aggies have forced 11 fumbles and recovered 10 this season. … Texas A&M ranks fifth in the SEC with 37 pass breakups. … DB Antonio Johnson had 10 tackles, including two for losses and forced a fumble last week in his return after missing three games with an injury. … RB Devon Achane ranks third in the SEC by averaging 98.6 yards rushing.