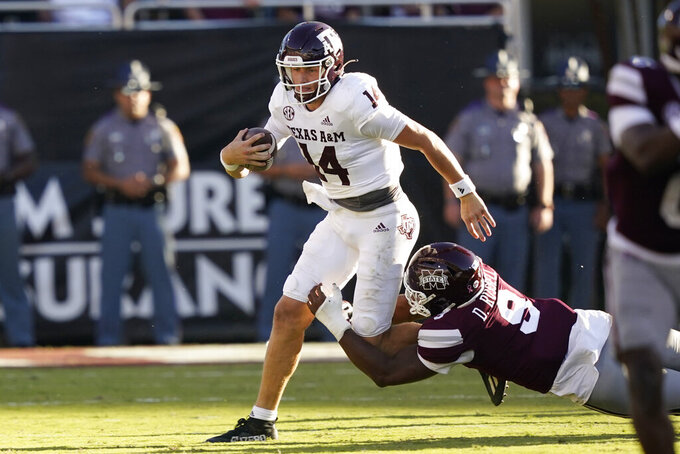 Line: Alabama by 23 1/2, according to FanDuel Sportsbook.

Both teams are seeking a measure of redemption. Alabama wants to avoid a repeat of last season's upset at Texas A&M, which was unranked and a heavy underdog then, too. The Aggies are trying to bounce back from a loss to Mississippi State that completed a tumble from the top 10 to unranked, just like last season. Both teams have quarterbacks listed as day to day with injuries from last weekend. Crimson Tide Heisman Trophy winner Bryce Young is nursing a sprained throwing shoulder. Texas A&M's Max Johnson hurt his throwing hand.

The Aggies' sputtering, sometimes mistake-prone offense against the Tide defense. Texas A&M is last in the SEC in both total offense and scoring offense, averaging just 335 yards and 21.8 points a game. Those figures rank 105th and 108th nationally, respectively.

Texas A&M: RB Devon Achane is the SEC's No. 3 rusher, averaging 93.2 yards a game. He also tops all Power Five players with a 34.25-yard average on kick returns, including a 95-yard touchdown against Appalachian State.

Alabama: RB Jahmyr Gibbs is another versatile running/receiving/returning threat who's coming off a 206-yard rushing effort against Arkansas. That included fourth-quarter touchdowns of 72 and 76 yards. He has led the Tide in rushing three times and been tops twice in catches while returning kicks.

Alabama has won eight of the last nine meetings, with all but two coming by double digits. ... Texas A&M's Jimbo Fisher is one of two former Nick Saban assistants to beat him. Saban is 25-2 in those matchups. ... Alabama leads the nation in average yards per rush at 7.35, ranking seventh with 251.4 rushing yards a game. ... Both Tide quarterbacks have long runs this season. Jalen Milroe ran 77 yards on a fourth-down play and Young earlier had a 63-yarder against Utah State. ... Texas A&M defensive back Antonio Johnson is second in the SEC with 46 tackles.