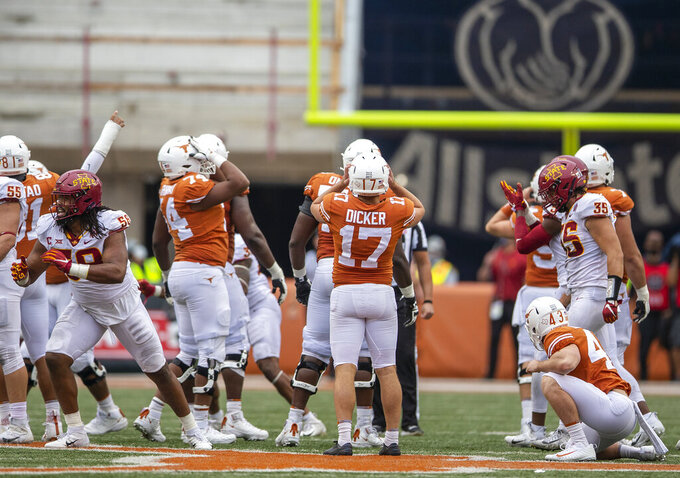 Texas kicker Cameron Dicker (17) reacts after missing the field goal to send the game into overtime against Iowa State during the second half an NCAA college football game on Saturday, Nov. 27, 2020, in Austin, Texas. (Ricardo B. Brazziell/Austin American-Statesman via AP)

AUSTIN, Texas (AP) — Texas coach Tom Herman batted away questions about his future with the program on Monday, trying to keep the focus on the players trying to win their last two games of the regular season, even as two of them decided to leave early.

When pressed on whether his weekend conversations with athletic director Chris Del Conte gave him any clarity on his job status, Herman described his relationship with his boss as “great” and said the talks were focused on Saturday's road game.

But Texas will play at Kansas State, at Kansas a week later, without starting left tackle Sam Cosmi and starting safety Caden Sterns, who decided to skip the final two games and start preparing for the 2021 NFL draft. Cosmi announced his decision Sunday and Sterns followed Monday night.

Herman’s job status has become an open question now that Texas once again is left without a realistic chance for the Big 12 championship. The title drought has now stretched to 11 years, the state's top recruits are looking elsewhere and one of the Longhorns' best players is skipping the final two games to focus on a potential NFL career.

Herman is 30-18 in four seasons and last week's 23-20 loss to Iowa State effectively knocked Texas (5-3, 4-3 Big 12) out of league title contention after being ranked as high as No 8 earlier this season. The Longhorns have made the league championship game just once, in 2018, and haven't won the league since 2009.

Herman said the standard for Texas should be for the Longhorns to be in the Big 12 title “conversation” and competing for the championship every November and December.

“We were there this year. We were there two years ago,” Herman said, referring to 2018 when Texas lost in the Big 12 championship game before beating Georgia in the Sugar Bowl.

It was after the Sugar Bowl that quarterback Sam Ehlinger told the cheering Longhorns supporters, “We're ba-ack!”

Texas certainly expected more than championship conversations when it hired Herman away from Houston in late 2016 with a contract that pays him more than $6 million per year and has a buyout of more than $15 million if he is let go. His contract runs through 2023.

The economics of Herman's remaining contract, plus millions more to buy out guaranteed contracts for assistants, and whatever amount Texas will need to hire a new coach have to be a factor for the Del Conte and the rest of the school's administration and financial backers. Herman revamped his coaching staff after 2019 with seven new assistants, including offensive and defensive coordinators with multi-year, guaranteed contracts.

Del Conte did not immediately respond to a request for comment.