Ties that bind: Some in CFP will face their former schools 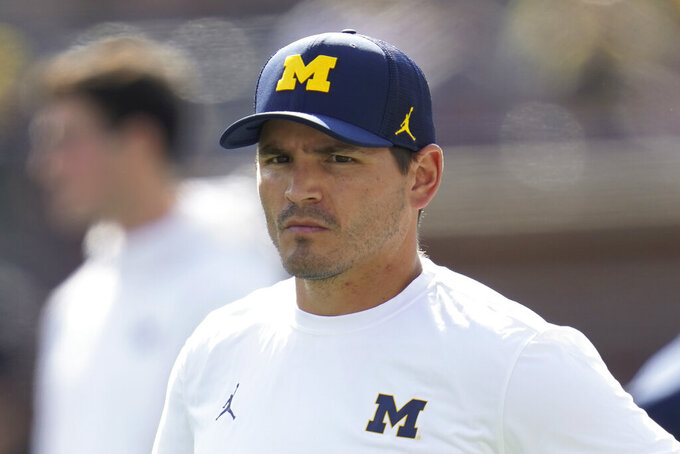 MIAMI GARDENS, Fla. (AP) — Michigan defensive coordinator Mike Macdonald went to high school in Georgia. He’s a University of Georgia graduate. He once worked on the staff at Georgia under Mark Richt as a graduate assistant.

And now they get to try to beat their old schools.

There are plenty of ties that bind for all four teams going into the College Football Playoff semifinals Friday, and the ones featuring Macdonald and Ford might be the best of the bunch. Macdonald will look to slow down Georgia — his alma mater — in the Orange Bowl. Ford is Cincinnati's top rusher, set to play against Alabama at the Cotton Bowl.

“I’m looking down here at the microphone and it says Orange Bowl,” Macdonald said while meeting with reporters virtually on Tuesday morning. “And it’s kind of hard to believe that we’re here.”

Oh, in his case, that’s true on a lot of levels.

Let’s start at the beginning: He played high school football in Roswell, Georgia, for a man named Xarvia Smith. The respect was mutual, and when Macdonald was 21 and in the honors program on his way to a business degree from Georgia, Smith got a job at another high school. He offered Macdonald a chance to be defensive coordinator for the freshman team. Six shutouts later by that group, Macdonald was promoted to the varsity coaching staff — juggling that with his senior year of college.

“I had some great relationships with some of those players still to this day,” Macdonald said. “Obviously, Coach Smith is a mentor of mine. We were just texting actually probably a day or two ago. That was a great memory, man.”

He’s not the only Michigan man with deep Georgia ties. Defensive lineman Chris Hinton is one of seven Wolverines who list Georgia as their home state, and Hinton nearly signed with the Bulldogs.

“I grew up with a lot of those guys over there at UGA, just growing up or through the recruiting process or through basketball, so it’s going to be fun going against some familiar faces,” Hinton said. “They recruited me hard and were honestly my second school. That’s really my second school, my second option. It’s going to be really fun going against those guys. I’m excited for the game.”

And Hinton gives Macdonald plenty of credit for getting Michigan to this moment.

“I think he does a great job of putting people in great positions to make plays, and he does a great job just relating to his players,” Hinton said. “We understand what he’s thinking, he understands what we’re thinking, and we’re able to bounce off of that, bounce ideas off of that, and I think that’s paid dividends to our success this year. I mean, we love Coach Mac.”

Ford helped carry Cincinnati to this stage, becoming one of the nation's breakout stars in 2021 and — as luck would have it — getting the chance to face a program he knows plenty about in the semifinals.

Ford carried the ball 31 times in two seasons for Saban and the Crimson Tide. But he's grown fatigued of being labeled “the Alabama transfer."

Facing his former team might be an interesting plot twist, but Ford has a chance to help Cincinnati get to the national title game. That's all the motivation he says he needs.

“I’m real motivated to play," Ford said. “There’s nobody or nothing the team that we are playing could do to possibly add any motivation. I feel like I’m very intrinsically motivated, and everything I have comes from inside."

As is the case with Ford, there's no question about where Macdonald's loyalty lies this week.

After his stint at Cedar Shoals, Macdonald became a grad assistant at Georgia. This was before iPads and tablets; playbooks were actually still books back then, and Macdonald was part of the group assembling them.

“I remember just having a really rough relationship with the printer,” he said.

Office machinery issues notwithstanding, Macdonald became further convinced that coaching was his calling. Richt moved him up to defensive quality control coach for three years, before Macdonald decided in 2013 that it was time to put his business degree to use. He accepted an offer to work at KPMG, along the same time that John Harbaugh — the brother of Michigan coach Jim Harbaugh — was looking for interns with the Baltimore Ravens.

The KPMG move never happened. Macdonald spent seven years with the Ravens, got hired at Michigan this past January and the rest is history.

“Just extremely fortunate,” Macdonald said. “Talk about just luck of the draw. Man, am I blessed that that happened, so otherwise we wouldn’t be sitting here.”