A timeline of Vince Dooley's life and career 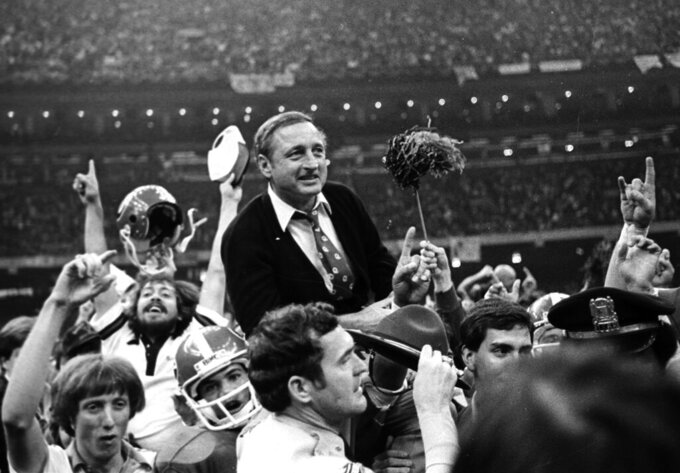 FILE - Georgia football coach Vince Dooley is carried off the field after Georgia defeated Notre Dame 17-10 in the Sugar Bowl college football game Jan. 1, 1981, in New Orleans. Vince Dooley, the football coach who carried himself like a professor and guided Georgia for a quarter-century of success that included the 1980 national championship, died Friday, Oct. 28, 2022. He was 90. (AP Photo/Gene Blythe, File)

ATLANTA (AP) — A timeline of Vince Dooley’s life and career:

1951 — Began his three-year career at Auburn, where he played quarterback under famed coach Shug Jordan.

1963 — With no previous head coaching experience, Dooley is hired as Georgia’s football coach shortly after the Bulldogs wrapped up their third straight losing season under Johnny Griffith.

1964 — Leads Georgia a 7-3-1 record in his inaugural season, including a victory over Texas Tech in the Sun Bowl.

1966 — Leads Georgia to its first Southeastern Conference title since 1959 with a team that finishes 10-1, its only loss a 7-6 setback at Miami. The Bulldogs defeated SMU 24-9 in the Cotton Bowl and finished No. 4 in the national rankings.

1968 — Georgia captures the second SEC title of the Dooley era, posting an 8-1-2 mark. The only loss was a 16-2 setback to Arkansas in the Sugar Bowl.

1976 — The Bulldogs capture their third SEC title under Dooley, highlighted by a 21-0 shutout of Bryant’s Alabama team at Sanford Stadium. An upset loss at Ole Miss ruined a perfect regular season, and Georgia is blown out by Tony Dorsett and national champion Pittsburgh 27-3 in the Sugar Bowl.

1977 — Georgia struggles to a 5-6 mark — the only losing season of Dooley’s coaching career.

1980 — After landing touted running back Herschel Walker, Georgia captures the fourth SEC title under Dooley and its first undisputed national championship. The 12-0 season includes a memorable victory over Florida on Buck Belue’s 93-yard touchdown pass to Lindsay Scott and is capped with a 17-10 triumph over Notre Dame in the Sugar Bowl. After the season, Dooley considers an offer to return to his alma mater but decides to stay at Georgia.

1981 — Georgia captures its second straight SEC title (and fifth with Dooley), but any hopes of repeating as national champion are dashed by an early 13-3 defeat at Clemson and a 24-20 upset loss to Pitt in the Sugar Bowl. The Bulldogs finished 10-2 and ranked No. 6.

1982 — The last of Dooley’s six SEC titles marked a third straight finish atop the league standings. The Bulldogs went 11-0 during the regular season and were ranked No. 1 heading into a Sugar Bowl showdown against Joe Paterno and No. 2 Penn State. But the Nittany Lions captured the national title with a 27-23 victory. Walker became the second Georgia player to capture the Heisman Trophy, but gave up his senior to season to sign with the upstart U.S. Football League.

1988 — In Dooley’s final season as coach, the Bulldogs finished 9-3 and defeated Michigan State 34-27 in the Gator Bowl. He finishes with a career record of 201-77-10, which at the time was the second-most wins in SEC history behind only Bryant. Dooley remains as Georgia’s athletic director.

1994 — Inducted into the College Football Hall of Fame.

2001 — Hires Mark Richt to launch a return to national prominence for the Bulldogs’ football program.

2004 — Retires after four decades at Georgia, a decision that was forced on him after a spat with Michael Adams, the university president.

2019 — School honors Dooley by putting his name on the field at Sanford Stadium.