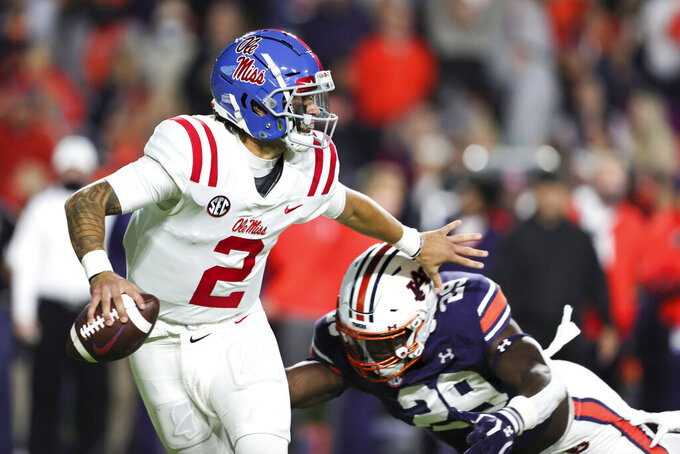 Mississippi quarterback Matt Corral (2) is pressured by Auburn defensive end Derick Hall (29) during the first half of an NCAA college football game Saturday, Oct. 30, 2021 in Auburn, Ala. (AP Photo/Butch Dill)

Hugh Freeze will be back pacing the sidelines in Oxford, Mississippi, and two of college football’s top quarterbacks will square off on the field.

Several intriguing storylines will play out when Freeze and quarterback Malik Willis lead Liberty (7-2) against Matt Corral and No. 15 Mississippi (6-2, No. 16 CFP) on Saturday.

Freeze’s return garnered headlines leading up to the game because of his tenure at Ole Miss — and the embarrassing way it ended. Once the game kicks off, the two double-threat quarterbacks and p otential first-round NFL draft picks will take over.

Freeze's five-season tenure at Ole Miss was characterized by considerable on-field success and substantial scandal. The Rebels were eventually forced to vacate 33 wins — 27 under Freeze — and weather heavy NCAA sanctions because of recruiting and academic violations committed under Freeze and his predecessor, Houston Nutt.

Then Freeze was forced to resign in July 2017 after an investigation revealed that he’d made phone calls to a female escort service. His first thought when Ole Miss was scheduled: “Must get out of that game.”

"Great memories of great victories and great friends is just what I choose to remember,” Freeze said. “And we had some epic wins there. And you know, we proved that that university can win in that difficult conference.”

Having a standout quarterback certainly helps.

Corral is regarded as among the three leading Heisman Trophy candidates by oddsmakers.

He and Willis are the only two FBS quarterbacks ranked among the top 30 nationally in both passing and rushing touchdowns.

“I was just always amazed at how well they played on game day,” Kiffin said. "Kind of the fresh theory. Just knowing their practice plans versus ours at Alabama. He had them fresh and ready to go on game day.”

The game has drawn considerable interest from NFL teams, largely because the matchup features two of the top quarterback prospects. About 20 NFL representatives from 17 teams are scheduled to attend the game. Kiffin said multiple general managers are also expected to be on hand.

The Rebels continue to pile up injuries on the offensive side of the ball, including their three top receivers Dontario Drummond, Jonathan Mingo and Braylon Sanders.

“I’ve never seen anything like this,” Kiffin said. “It does present a good challenge for us in gameplanning and calling plays during games. I looked around and we practiced with two of the 11 starters that started the opener, a number of which are out for a while or for the rest of the season. That is very strange on one side of the ball.”

He said two or three of those injured players could see the field against Liberty, but didn't name them.

The Flames, in their fourth season at the FBS level, are 1-2 against Top 25 teams. But they did beat No. 9 Coastal Carolina in last season's Cure Bowl. Liberty is ony 2-5 against Power Five teams under Freeze, but was 0-6 entering the 2017 season.

The last time Liberty faced a team from the Southeastern Conference, they lost 53-0 to Auburn in 2018. Then the Tigers' backup QB, Willis ran for a 16-yard touchdown.

The Flames’ defense ranks No. 10 nationally, allowing 300 yards per game, and 13th in scoring defense, allowing 17.8 points per game. But Liberty has not faced an offense with the speed or effectiveness of Ole Miss. The Rebels have scored at least 50 points three times and average 39.1.