Troy heads to Missouri with another upset in mind 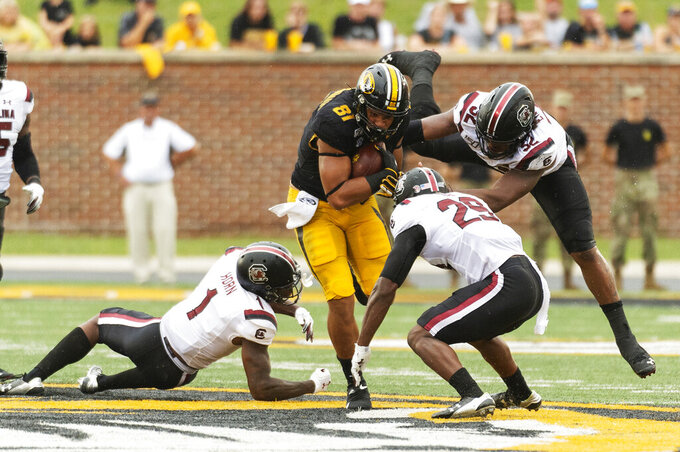 Among the many reasons former Troy coach Neal Brown earned the job at West Virginia was his success against programs from Power Five conferences, including a win at Nebraska last season.

It’s hardly the only time the Trojans have tussled with a big-name school, too.

There was the upset win at No. 25 LSU the year before, and the nip-and-tuck loss at then-No. 2 Clemson the year before. They came within a field goal of beating Oklahoma State on the road in 2010.

Now, the school just about equidistant from Alabama and Auburn has a chance to take down the Tigers again. Troy heads to Missouri on Saturday for what new coach Chip Lindsey _ a former Auburn offensive coordinator _ hopes is a statement game against an SEC foe.

“The opportunity to play in these games is what makes Troy a special place for our players to come to,” he said. “Obviously each year is different because the team is different, and I wasn’t here the last couple of years, but I know our players are excited about this opportunity.”

Missouri coach Barry Odom knows better than to overlook the Trojans (2-2), though. The Tigers lost to Middle Tennessee in 2016, his first season in charge, and at Wyoming this season.

Both of those games the Tigers were expected to win.

But a big difference this week: Missouri is coming off three straight wins and a bye.

“In a way we're as healthy as a team as we've been since we started, which is awesome,” Odom said. “We had bonus practices on our next opponent. Really a very thorough self-evaluation and self-analysis on all three phases of our game on where we are and what we need to do to improve, and the reasons we haven't had success in some areas, how we can have success in those things.”

One area where it will be hard to improve is consistency on offense. The Tigers (3-1) have won their last five home games by a combined 193-49 dating to last season, and they have scored at least 31 points in nine consecutive games _ the school’s longest such streak since the 2006-07 seasons.

Missouri has struggled following byes under Odom, getting pounded by Florida in 2016, losing at Kentucky the following year and dropping a nail-biter at South Carolina last season.

“I’ve learned just to deal with it,” Odom said. “You know, don’t run from the fact of what it is. Address it with the team. They understand where we are and what we need to do. And they’ve responded in the way that we want them to respond.”

For all of Missouri’s recent offense, it was the defense that made the two defining plays of its win over the Gamecocks. Cale Garrett recovered a fumble in the end zone for a touchdown to make it 7-0, and Ronnell Perkins returned an interception 100 yards for a touchdown later in the game. It marked the first time since 2014 the Tigers had fumble and interception touchdowns in the same game.

There’s a good argument to be made that Troy has the most dynamic offense that Missouri has faced this season. The Trojans are ranked 32nd nationally and have scored at least 40 points in both of their losses. Their quarterback, Kaleb Barker, has thrown for 1,367 yards with 13 TDs and two interceptions.

Troy is allowing 29.5 points per game, which is not particularly good. But that doesn’t mean there is no talent on that side of the ball. Odom highlighted Trojans linebacker Carlton Martial, who has 43 tackles and 7 1/2 tackles for loss already this season.

Clemson transfer Kelly Bryant has been making plays for Missouri all season, but he’s starting to come into his own the last couple weeks. He was 19 of 33 for 227 yards and two touchdowns in a win over South Carolina before the bye, and ran 11 times for another 77 yards.

“He’s a fantastic player,” Lindsey said. “I coached against him when he was at Clemson, and I thought he always threw the deep ball well, but it looks like he’s developed even further since then. He’s a very good athlete who can hurt you with his feet as well.”