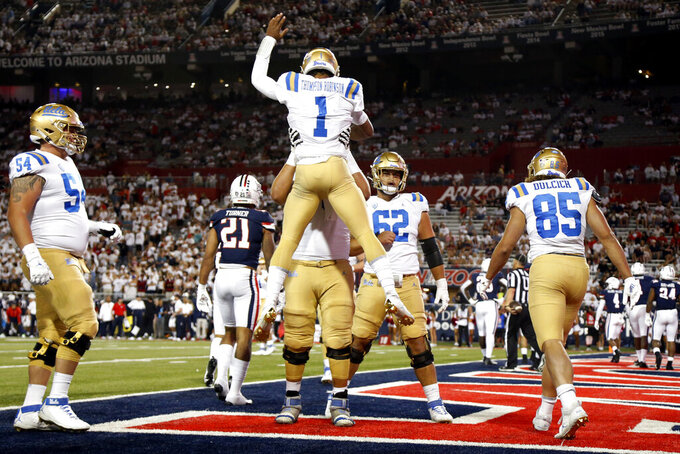 UCLA quarterback Dorian Thompson-Robinson (1) is hoisted after his rushing touchdown during the third quarter against Arizona in an NCAA college football game Saturday, Oct. 9, 2021, in Tucson, Ariz. (AP Photo/Chris Coduto)

SEATTLE (AP) — It might be a message as much for his team as the general public, but UCLA coach Chip Kelly isn’t buying the idea that Washington is on the downswing, especially on the defensive side.

Kelly has too much respect for what Washington has done in the past to fully believe in what the statistics might say about the Huskies.

“Turn the tape on, that’s a really, really, really good defense,” Kelly said. “They’re tough, they’re physical, they get after you, I think they’re really well-coached, so we’ve got our hands full with their defense in every facet, whether it’s run or pass.”

UCLA expects to get tested Saturday facing Washington in a matchup of teams that still have lingering hopes of contending for division titles.

The game can be viewed as a must-win situation for both sides. UCLA (4-2, 2-1 Pac-12) already has a loss to Arizona State in the Pac-12 South and another setback would severely hamper the Bruins' chances of winning a division title.

Washington (2-3, 1-1) has the benefit of being in the jumbled mess that is the Pac-12 North and with games remaining against Stanford and Oregon, the Huskies can still find a way into the division race. But a win over the Bruins is likely a must to make that possible.

“We’re in a way better position now with almost everybody healthy,” Washington coach Jimmy Lake said. “And so we’re planning on showing a lot more progress here coming up.”

The biggest matchup will be UCLA’s dynamic run game, led by quarterback Dorian Thompson-Robinson and running backs Brittain Brown and Zach Charbonnet, against a Washington defense that’s been susceptible to the ground game this season. The Bruins are averaging 217 yards per game rushing, while the Huskies are 10th in the Pac-12, giving up 173 yards per game on the ground.

There might not be much information they can pass along but UCLA backup quarterback Ethan Garbers and wide receiver Colson Yankoff both started their careers at Washington before transferring to join the Bruins.

Thompson-Robinson is still trying to glean what he can from the pair.

“I talked to Garbers about it a little bit and he’s kind of giving me some tips and clues and stuff since he was on their scout team going against their 1s defense at his time there,” Thompson-Robinson said.

Washington’s offense has been a significant underperformer. The Huskies rank 11th in the conference in yards rushing per game (103.8), 10th in total offense (357.0) and eighth in scoring offense (24.6). The disappointing run game is one of the big surprises this season considering Washington returned its entire starting offensive line and four proven running backs.

Washington is hoping what it saw against Oregon State is a sign of what’s to come. The Huskies got 188 yards rushing combined from Sean McGrew and Kamari Pleasant, most of that coming in the second half.

Lake dropped a major piece of good news for Washington earlier this week when he announced that Zion Tupuola-Fetui had started practicing six months after suffering a torn Achilles tendon during spring practices. Nicknamed “ZTF,” Tupuola-Fetui was a dominant force during the limited 2020 season with seven sacks in just three games.

Lake had said Tupuola-Fetui would play at some point this season but he did not promise it would be Saturday. Even so, his timeline for returning appears to be well ahead of the most optimistic thoughts.

“For an injury like his, there’s going to be for sure some rust,” Lake said. “That’s for anybody. That’s not anything about Zion. That’s a horrible injury to take, and there’s going to be those butterflies that first play he plays, whenever that is.”