An ugly day for both the Wolverines and Spartans 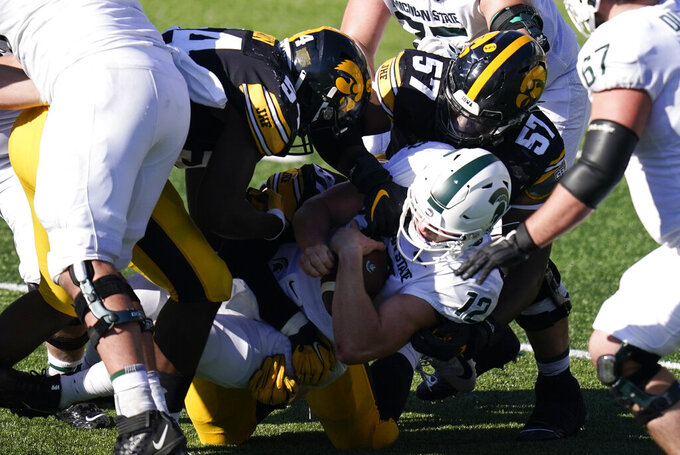 A week after renewing their heated rivalry, both Michigan and Michigan State fell flat.

It's hard to figure out which team should feel more disturbed.

The 23rd-ranked Wolverines lost their second straight game Saturday, falling 38-21 to No. 13 Indiana. It's been quite a decline for Michigan after what looked like a promising season-opening win over Minnesota. Less was expected from Michigan State, but the Spartans upset the Wolverines last weekend. Then they were routed Saturday, 49-7 by Iowa.

“Totally unacceptable performance,” Michigan State coach Mel Tucker said. “Our standard is much higher than what we’ve shown. We’re going to go back and take a hard look at every single play, every single player.”

Plenty of football fans in Michigan probably had a similar reaction on this day. The Spartans failed to build on their big victory over the Wolverines, and rivalry considerations aside, that win lost some of its luster when Michigan lost again.

For a second straight week, the Wolverines had problems in pass coverage. Indiana's Michael Penix Jr. threw for 342 yards and a career-high three touchdowns. It was the Hoosiers' first victory over Michigan since 1987, snapping a 24-game losing streak in the series.

Maybe so, but there haven't been many positive signs for Michigan since a 49-24 victory at Minnesota in the opener. For one thing, Minnesota lost the following week to Maryland. Then the Wolverines lost 27-24 to a Michigan State team that had dropped its opener to Rutgers.

After this weekend, the overall evidence suggests that both Michigan and Michigan State have serious problems.

“We have a tremendous amount of work to do,” Tucker said. “We have to get tougher, we have to be more physical and we have to play smarter.”

Michigan State's struggles were expected. The Spartans changed coaches this offseason when Mark Dantonio retired, and they'd slipped as a program in recent years. The victory over Michigan earned Tucker some immediate benefit of the doubt.

Harbaugh may have run out of that at Michigan. The Wolverines have had some solid seasons under him, but they haven't fulfilled the highest expectations for Harbaugh's tenure, and now they're losing games they would generally be expected to win.

The defense looks like a bigger problem than the offense at this point, and a big home game against Wisconsin looms next weekend.

“I love coaching these guys. I love this team,” Harbaugh said. “They're talented. They play hard. Preparation is good, and we see what guys are capable of doing.”

As for the Spartans, they host the same Indiana team that just handled Michigan. It'll be the second time this season that Michigan State has to try to bounce back from a jarring loss.

“We lost to Rutgers, which was a big loss, and we didn’t pout about it and just think we’re going to go 0-8,” quarterback Rocky Lombardi said. “We came together and beat Michigan. It will have to be the same this week.”