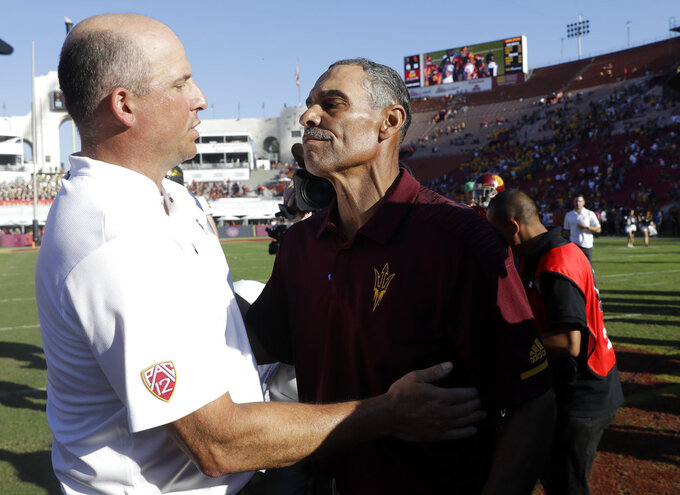 With the season slipping away from the defending Pac-12 champions, Helton announced a shake-up of his coaching staff two days after USC dropped to 4-4 with its second straight defeat, a 38-35 home loss to Arizona State.

Helton took away the play-calling responsibilities from offensive coordinator Tee Martin, who remains on staff.

The Trojans' talent-laden offense is mired in 11th place in the Pac-12 with just 364 yards per game, and Helton has put the responsibility for its success directly on himself.

"I felt it was an appropriate time to become more involved in the offense as we continue to develop our team for the future," said Helton, who typically meets with USC athletic director Lynn Swann on Mondays.

"Tee and I have had conversations about this decision, and he was supportive," Helton added in his statement. "He has done a tremendous job here. He will stay involved with the offense as he remains the offensive coordinator, helps put together our practice and game plans, and serves as my offensive eyes during games."

USC's offense has struggled in Helton's first full season without Sam Darnold as his starting quarterback. The Trojans won the Rose Bowl in 2016 and the conference title in 2017 behind Darnold, who became the No. 3 overall pick in the last NFL draft.

JT Daniels, the 18-year-old freshman picked as Darnold's replacement, has displayed talent while also being overwhelmed at times. Daniels has 1,629 yards passing, but his 125.3 quarterback rating is 11th in the conference, and he has just eight touchdown passes with seven interceptions.

Daniels missed the Trojans' loss to the Sun Devils while recovering from a concussion, and the Trojans fell out of first place in the South division with back-to-back losses.

Arizona State ended a 19-game home winning streak for USC, which hadn't lost at the Coliseum during Helton's entire head coaching tenure. He replaced Steve Sarkisian midway through the 2015 season and got the permanent job later that season from since-departed athletic director Pat Haden.

The Trojans' offensive line has been a target of criticism throughout the season, and Helton apparently agreed.

Callaway is a longtime friend of Helton and a close associate of Helton's father, former University of Houston head coach Kim Helton. Callaway and Kim Helton worked for each other at previous head coaching stops for both men.

"I want to thank Neil for all his hard work at USC," Helton said. "He is an outstanding coach and a great friend. I wish him nothing but the best in the future."