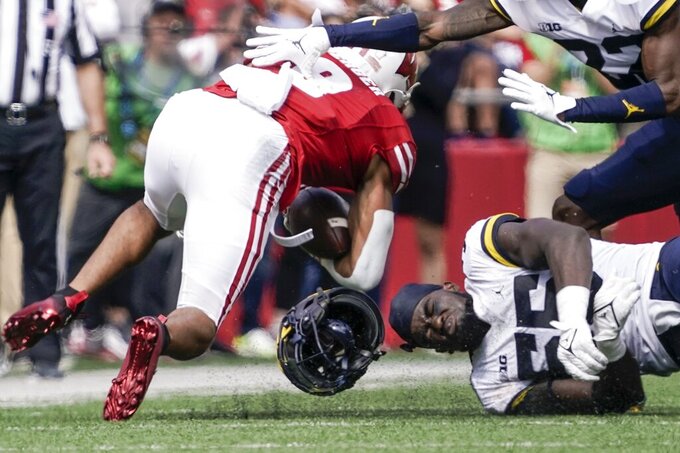 Michigan's David Ojabo loses his helmet as he stops Wisconsin's Jalen Berger during the second half of an NCAA college football game Saturday, Oct. 2, 2021, in Madison, Wis. (AP Photo/Morry Gash)

MADISON, Wis. (AP) — Wisconsin has dismissed running back Jalen Berger from its football program one year after he led the team in rushing.

Badgers coach Paul Chryst announced the move in a statement Sunday without specifying a reason for the dismissal. Berger didn’t play Saturday in Wisconsin’s 24-0 victory at Illinois.

Berger, who is from Newark, New Jersey, rushed for a team-high 301 yards as a freshman last season despite missing three of Wisconsin’s seven games due to injury. But his playing time had been sporadic this year as he slipped down the depth chart.

He didn’t play in a season-opening 16-10 loss to Penn State while Clemson transfer Chez Mellusi and Isaac Guerendo got the bulk of the carries. Chryst said two days later that Berger had a “good approach,” adding, “just because he didn’t play doesn’t mean he’s doing something wrong.”

Wisconsin ran 61 times for 391 yards without Berger in the backfield Saturday, as Mellusi gained 145 yards on 21 carries and freshman Braelon Allen rushed for 131 yards on 18 attempts.

Berger ends his Wisconsin career with 84 carries for 389 yards and three touchdowns, plus four catches for 30 yards. He had 24 carries for 84 yards and one score plus two receptions for 17 yards this season.

He's the third Wisconsin running back to depart since the preseason.

Wisconsin dismissed Loyal Crawford and suspended Antwan Roberts in the week leading up to the Penn State game after police said Crawford armed himself with a knife during a fight in a dorm. Crawford was cited on misdemeanor charges of criminal disorderly conduct and disorderly conduct while armed.

Roberts entered the transfer portal less than three weeks after his suspension was announced.