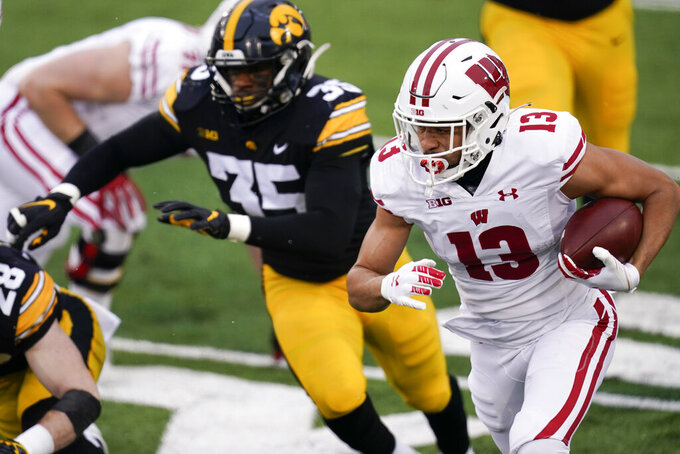 Quarterback Graham Mertz and the Wisconsin Badgers vow to keep trying to find ways to rejuvenate an offense that has lacked punch during a rare three-game skid.

The Badgers (2-3) have scored seven points or fewer in each of their last three games. Wisconsin tries to avoid its first losing season since 2001 when it hosts Minnesota (3-3) on Saturday.

“Everything in life comes down to how you respond,” Mertz said Monday. “The cool thing about it is it’s all on you. You can ball your fists up and go fight, or you can sit back and just relax. There’s only one way out of those two that I’m going to go. I’m going to ball up my fists and go.”

This marks the first time Wisconsin has lost three consecutive games within the same season since dropping four straight in 2008. Their last three-game skid of any sort occurred when they lost their final two games in 2013 along with their 2014 opener.

That lack of production explains why Wisconsin is below .500 despite allowing the fewest yards per game of any Football Bowl Subdivision team and ranking sixth in scoring defense.

“Everyone’s got to do their part,” coach Paul Chryst said. “That’s what’s neat about the game. Everyone has an important part, and when you all do it, that’s when good things happen. You’ve got to execute.”

He tested positive for COVID-19 soon thereafter but responded with a solid performance in a 49-11 blowout of Michigan three weeks later.

Since then, he has struggled mightily.

In his first two games, Mertz completed 74.4% of his passes for seven touchdowns with no interceptions. In the three games since, he has completed 55.8% of his attempts with five interceptions and one touchdown pass.

“Obviously we’re not playing the way we want to play,” Mertz said after the Iowa game. “That’s frustrating. In the end, it just comes down to execution. I put that on my plate. We’ve got to execute better. Our defense has been playing great. Special teams have been playing great. We just need to respond. I know we will and I know we can.”

That offense has been decimated for much of the last month.

But the problems with the offense go beyond the health issues.

“The things that we’ve been struggling on are just overall energy levels,” running back Garrett Groshek said. “It really comes down to executing. We haven’t done a good job helping Graham out. Drops here and there. Penalties. Pre-snap penalties. We’ve just got to stop beating ourselves. I think if we start bringing some energy, I think we’ve got a chance to correct those little mistakes.”

Mertz believes the Badgers will have plenty of energy with Paul Bunyan’s Axe at stake as Wisconsin and Minnesota continue the most-played FBS rivalry.

“People can say whatever they want, but I’m proud of this team,” Mertz said. “I love this team. There’s some stuff brewing up here. The fists will be balled. Be ready.”