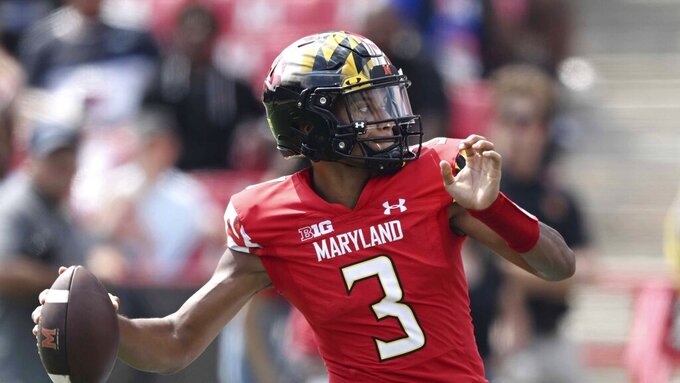 Line: Maryland by 27 1/2 points, according to FanDuel Sportsbook.

Maryland will look to continue to build momentum after a solid 31-10 win last week at home against Buffalo. For Charlotte, it is a chance to turn things around after a brutal start. After getting blown out in their season opener at Florida Atlantic 43-13, the 49ers lost their home opener to FCS school William & Mary 41-24 after getting outscored 21-0 in the fourth quarter.

Maryland running game vs. Charlotte's defense: The Terrapins got two touchdowns runs each last week from redshirt freshman Roman Hemby and Antwain Littleton. Hemby averaged 16.3 yards per carry, finishing with 114 yards on seven carries. The 49ers haven't been able to stop anyone this season, allowing a combined 84 points to Florida Atlantic and William & Mary. Charlotte gave up more than 300 yards rushing last week.

Charlotte: QB Xavier Williams started the season No. 3 on the depth chart but has been pressed into duty after injuries to Chris Reynolds and James Foster. Williams passed for 201 yards and rushed for 48 yards and two scores against William & Mary. It's expected he will start again unless Reynolds is able to return from an upper body injury.

Maryland's QB Taulia Tagovailoa completed 24 of 31 passes for 290 yards and one interception in his season debut. ... Maryland had eight penalties for 82 yards last week vs. Buffalo. ... Charlotte has lost five consecutive games by an average of 20 points dating back to 2021. ... The 49ers' run game has been nonexistent, finishing with 2.7 yards per carry vs. Florida Atlantic and 3.6 yards per rush against William & Mary.