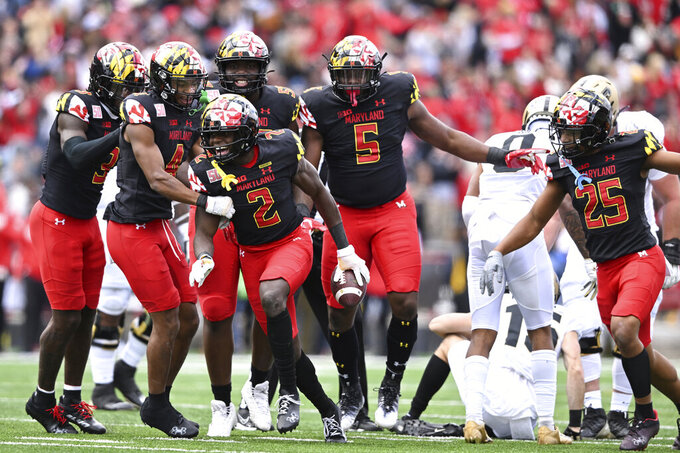 Maryland defensive back Jakorian Bennett (2) reacts after he intercepts a pass against Purdue in the second half of an NCAA college football game, Saturday, Oct. 8, 2022, in College Park, Md. Purdue won 31-29. (AP Photo/Gail Burton)

Line: Maryland by 11 1/2, according to FanDuel Sportsbook.

Both teams could use midseason reboots. The Terrapins have lost two of three though wins over Indiana and Northwestern the next two weeks would make them bowl eligible before having to play Wisconsin, Penn State and Ohio State. Reeling Indiana has lost three in a row since starting 3-0, and this week coach Tom Allen fired his offensive line coach. The Hoosiers desperately need a win on their home turf.

Maryland's pass rush vs. Indiana's offensive line. The Terrapins rank third in the Big Ten with 15 sacks and if they keep it up against Indiana, it could be the difference in this game. The Hoosiers already have allowed a league-high 19 sacks and have the league's second-worst ground game. The combination prompted Allen to promote Rod Carey to new offensive line coach even though he's spent most of this season working with Indiana's defense.

Indiana: WR Cam Camper. The Hoosiers top receiver returned last week but caught just two passes for 39 yards against Michigan. The Terrapins have struggled against the pass this season and Camper needs one more 10-reception game to tie the school's single-season record (Whop Philyor and Damarlo Belcher, three each).

Maryland has lost three of the last four in this series, is 1-4 all-time in Bloomington and hasn't been 5-2 since 2016. ... The Hoosiers are 3-1 on their home turf. ... The Terrapins have scored 27 or more points in eight consecutive games. ... Allen needs one victory to become the seventh coach in Hoosiers history with 30 career wins. ... Maryland has scored four touchdowns and two field goals on its first drives and is the only FBS team to score on its opening possession in every game this season. ... Grad transfer LB Bradley Jennings Jr. recorded 13 tackles in his Indiana starting debut and LB Dasan McCullough ranks second in the FBS among true freshmen in sacks (four). ... Maryland QB Taulia Tagovailoa threw for a career best 419 yards in last season’s 38-35 victory over the Hoosiers and enters this week ranked in the FBS’ top 25 in completion percentage (74.1), completions per game (24.3), yards passing (1,731) and total offense (303.2).