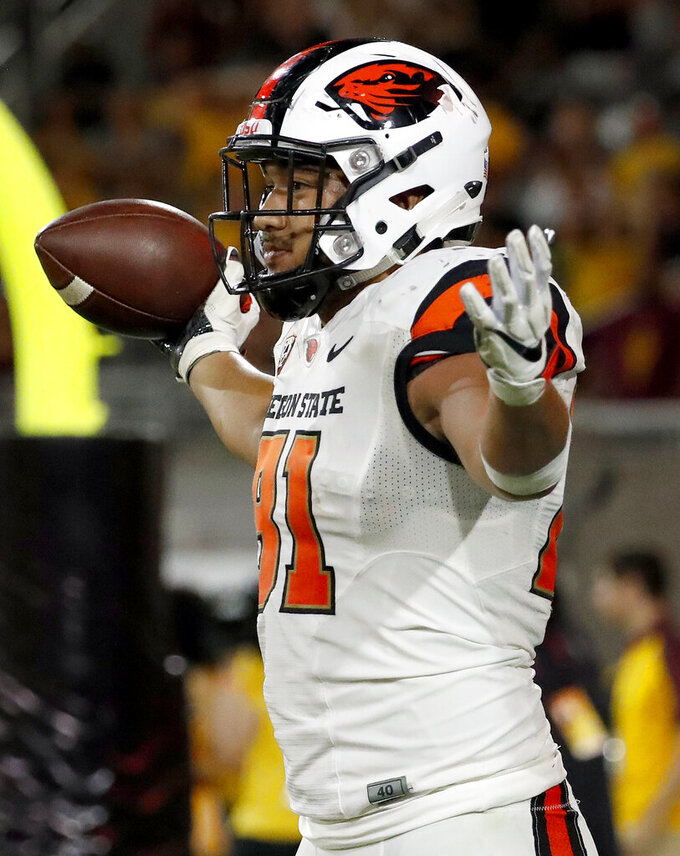 FILE - In this Sept. 29, 2018, file photo, Oregon State tight end Noah Togiai celebrates his touchdown catch against Arizona State during the second half of an NCAA college football game in Tempe, Ariz. The Beavers open at home with a Friday night game against Oklahoma State. (AP Photo/Matt York, File)

The former Beavers quarterback knew what he was getting into when he took over after a disastrous 2017. Entering his second season, he knows change will be incremental.

"It wasn't just going to flip in year one," Smith said. "We're taking a long-term approach on it."

The Beavers went 2-10 last year in Smith's debut as a head coach after a stint as quarterbacks coach at Washington. He assumed control of a team that had just one win the previous year.

While still picked to finish at the bottom of the Pac-12 North this season, the Beavers have reasons for hope.

One of them is running back Jermar Jefferson, who rushed for 1,380 yards last season, a school record for a true freshman, with 12 touchdowns. He averaged 115 yards rushing to rank among the top running backs in the nation, and was named the Pac-12 Offensive Freshman of the Year.

Another is Isaiah Hodgins, the team's leading receiver with 59 catches for 876 yards and five touchdowns. He had four games with 100-plus yards receiving.

Hodgins said he expects other players to emerge, too. But the key this year, he said, will be finishing.

"Especially last year, we came out with only two wins, but if you look at last year in the third and fourth quarters, it could have gone either way but we didn't finish that," Hodgins said. "It was really the difference between winning five or six last year and we could have easily been to a bowl game — especially if people had been healthy in certain games or what not."

QUARTERBACK COMPETITION: Returning is Jake Luton, who was awarded a sixth season of eligibility after a career marred by injury. Luton passed for a team-high 1,660 yards and 10 touchdowns last season despite missing four games with a concussion and a high ankle sprain. In his time with the Beavers, the 6-foot-7 Luton has passed for 2,513 yards and 14 touchdowns.

"We're expecting big things from him, and he's got a ton of experience. He's got some real talent. Love the approach he's taken really since January," Smith said.

He's getting competition in fall camp from Tristan Gebbia, a transfer from Nebraska who had to sit out last season per NCAA rules.

"Now I've just accepted it," he said. "I'm just one of the guys again. They like to joke with me but it's all good, I just let it roll off my back."

DEFENSE AN ISSUE: Oregon State's defense is the biggest question mark. The Beavers did not hold a conference opponent to fewer than 500 yards last season and gave up an overall average of 45.7 points and 536.8 yards per game — ranking them 129th in the nation.

Smith said the run defense has been a point of emphasis. The Beavers allowed an average of 281.8 rushing yards a game to rank last in the league.

"We needed to get better. It starts up front, and so we needed to grow and add to our defensive front, and that's taken place. We've got to be better tacklers in space. We've just got to do it, so we've been working on that," Smith said. "We did look at adding to and tweaking some schemes defensively to help against the run, so with all of that, confident we're going to be better against it."

FRIDAY NIGHT LIGHTS: The Beavers open at home with a Friday night game against Oklahoma State. Defensive back David Morris is anxious to show what the Beavers can do against the Cowboys, who went 7-6 last season.

"I want to make sure that we can hit all the spots that we were kind of weak in or that we were really weak in, to show these teams they can't just run or throw on us and think it's going to be an easy game," he said.