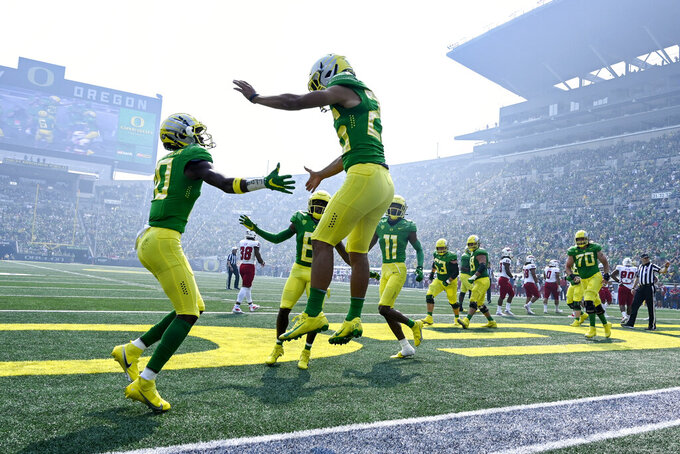 Oregon running back Travis Dye (26) celebrates his touchdown against Fresno State during the first quarter of an NCAA college football game, Saturday, Sept. 4, 2021, in Eugene, Ore. Smoke from wildfires is also seen in the stadium. (AP Photo/Andy Nelson)

UCLA won't be around to bail out the Pac-12 this weekend.

The Bruins' victory against LSU was the highlight of an otherwise unimpressive Week 1 for the West Coast's Power Five conference. The Pac-12 North was especially bad, going 1-5 with losses to two teams from the Mountain West teams and one from the Big Sky.

That's an FCS conference. A good one, but still.

No. 16 UCLA gets a well-deserved week off, but the rest of the conference is in action, including nine nonconference games.

At the top of the menu is No. 12 Oregon at No. 3 Ohio State. The Ducks are the Pac-12 defending champion and favorite. Ohio State is the same in the Big Ten.

That would seem to be a fair fight, but not according to the odds makers. FanDuel Sportsbook lists the Buckeyes as more than a two-touchdown favorite.

That says a lot about where the Pac-12 is right now, trying to break a four-season College Football Playoff drought. The Pac-12 has not beaten a top-five team in a nonconference game since 2015, when Stanford knocked off No. 4 Notre Dame.

The other marquee Midwest-Northwest game of the weekend was supposed to be taking place at the Big House in Ann Arbor, Michigan.

Washington visits the Wolverines from a primetime national TV game coming off 13-7 loss to Montana from the Big Sky. Way to kill the mood, Huskies.

No. 5 Texas A&M faces Colorado in Denver at the home of the Denver Broncos. No. 21 Utah is at rival BYU and California, coming off a loss to Nevada, is at TCU.

Among that group, Utah is the only one favored. This is not setting up well for a bounce-back weekend for the Pac-12, but as was the case last week with UCLA, one big victory can overshadow a several ugly losses.

If the Ducks can upset the Buckeyes in Columbus, it hardly matters what the rest of the conference does Saturday.

The picks with point spreads from FanDuel Sportsbook.

Chanticleers try to make it three straight seasons with a victory against Kansas ... COASTAL CAROLINA 42-14.

Bulldogs get at least one offensive touchdown this week. Probably several ... GEORGIA 38-10.

Last victory for the Ducks against a top-five nonconference opponent was 2003 against Michigan ... OHIO STATE 35-24.

Lots of Fighting Irish fans will be asking: What's Peacock? Answer: The streaming service you need to watch this game ... NOTRE DAME 28-13.

Hawkeyes have not committed a turnover in their five-game winning streak against the Cyclones ... IOWA STATE 24-23.

Starting quarterback switch for the Cardinal with Tanner McKee taking the job from Jack West ... USC 34-14.

First regular-season matchup between the once and future conference rivals since 2008 ... TEXAS 30-20.

First meeting between the Hokies and Blue Raiders ... VIRGINIA TECH 31-14.

Utes have won nine straight in the Holy War rivalry, matching the longest winning streak for either side; only two were more than one-possession games ... UTAH 27-21.

Tar Heels look to get QB Sam Howell back on track and give him some protection ... NORTH CAROLINA 45-17.