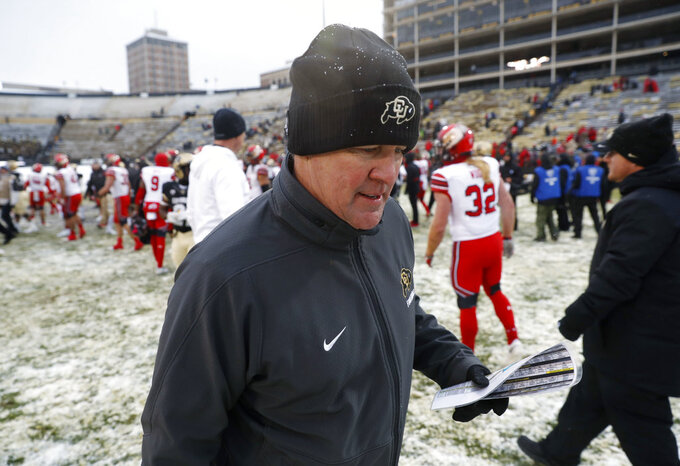 BOULDER, Colo. (AP) — Two years after he was named AP coach of the year, Mike MacIntyre's run at Colorado ended Sunday when he was fired amid a six-game skid in his sixth season.

"It was a difficult decision because Mike is a knowledgeable coach and he has really elevated this football team since 2013," athletic director Rick George said after asking quarterbacks coach Kurt Roper to serve as interim head coach for Colorado's final game next weekend.

"What this came down to was that I wanted to see more consistency with winning seasons," George said. "Mike had an amazing 2016 season. We really hoped that that kind of achievement would be continuous, but unfortunately that didn't happen."

MacIntyre was voted AP college football coach of the year after leading the Buffaloes to a Pac-12 South title and 10 victories in 2016. That was his only winning season at Colorado, going 20-40 overall and 6-38 in the Pac-12 in the other five.

MacIntyre is due about $10 million from the five-year extension he signed after that 2016 season.

As his extension was being finalized, MacIntyre fell under scrutiny over his improper handling of domestic abuse accusations against former secondary coach Joe Tumpkin by a former girlfriend. Tumpkin called the defensive plays during the Alamo Bowl on Dec. 29, 2016, and resigned a month later. MacIntyre's contract extension was held up for a few months by the Board of Regents.

After an outside investigation, MacIntyre, George and Chancellor Phil DiStefano were reprimanded, with DiStefano serving a 10-day suspension and MacIntyre and George ordered to make $100,000 donations to domestic violence causes.

George said he had no regrets over signing MacIntyre to that extension. "He deserved it and his staff deserved it," George said.

The Buffs slipped to 5-7 last season but began this year with five straight victories and moved into the AP Top 25 again.

The Buffs have lost several starters in the program's worst rash of injuries in 33 years, none more impactful than a turf toe that sidelined star sophomore receiver Laviska Shenault Jr. for a month.

Colorado tied a program futility mark by blowing a 28-point second-half lead against Oregon State last month. The following Monday, George went to MacIntyre and told him he still had his support.

"But as the next three weeks went by my gut told me I needed to ... bring on new leadership," George said.

He made the move now, he said, to inject some energy into the team because it can still earn a bowl berth with a victory Saturday over California: "We've still got a lot to play for."

Following Colorado's 30-7 loss to Utah on Saturday, MacIntyre maintained his belief that he'd keep his job in Boulder, where his son, Jay, was one of several seniors celebrated in pregame festivities.

"I don't feel like it's my last game," MacIntyre said. "We've got one more, hopefully we can win that and go to a bowl game."

MacIntyre, who had taken a photo of a bison heading into a storm into his weekly news conference with buzz already building about his job being in jeopardy, said Saturday the nature of coaching is being asked when you'll leave whether you're winning or losing.

"I could've left (for) three good places, and stayed," MacIntyre said. "That's just the way it is. When you're losing, they want to get rid of you. You never can win as a head coach on that and I understand that."

"My family loves it here. I definitely feel like this program has (progressed). You all saw it before I got here, it was abysmal. I feel like we've come a long way. This has been a tough stretch, there's no doubt about it. But no, you don't second guess anything like that, you do what you feel like is the right thing to do at the time."

MacIntyre then quoted senior receiver Kabion Ento, who spoke up after Saturday's loss, saying, "We've got one more to win one more."

A day later, that was no longer the case for MacIntyre but for Roper, his close friend of 20 years.