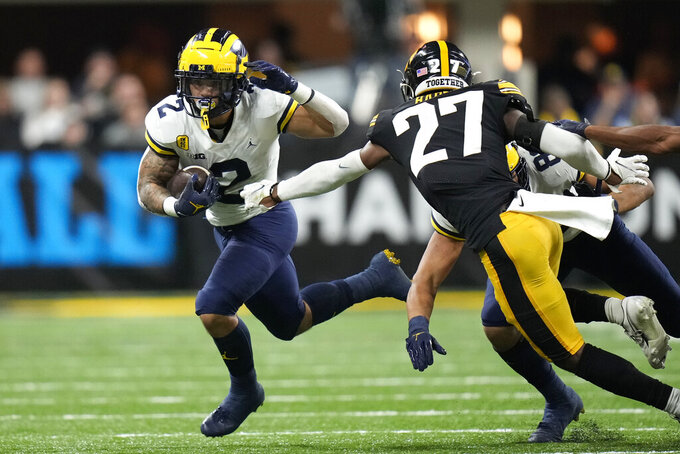 Early in the day, he is still locked into his current job, helping the third-ranked Bulldogs prepare for a College Football Playoff semifinal against No. 2 Michigan in the Orange Bowl on Friday.

As the days wind down on the East Coast, Lanning can turn his attention to Oregon and his new gig. The 35-year-old was hired to be the Ducks' new head coach two weeks ago.

“West Coast being three hours behind us has given us the opportunity to be able to really focus on Georgia early on during the day, and then later on at night be able to get a lot of things accomplished with our team there in Oregon and our staff, we’re piecing that together,” Lanning said.

For now, though, Lanning said he will continue to call defensive plays for the Orange Bowl.

“We’ll operate very similar to what we've operated all season. I’ll still be making the calls, but every single one of our defensive coaches have been extremely involved throughout the week, throughout our preparation, and this is a team effort,” Lanning said. “It's been a team effort all season and that doesn't change for this one game.”

Michigan running back Blake Corum said his sore right ankle is feeling the best it has in more than a month.

Corum was Michigan's leading rusher when he was injured against Indiana on Nov. 6. He did not play in the next two games before being used in a limited but effective role against Ohio State and Iowa in the Big Ten title game.

The 5-foot-8, 200-pound sophomore had 11 carries for 161 yards and a touchdown versus the Buckeyes and Hawkeyes. Michigan leaned more on its power back, Hassan Haskins, over the last month of the season.

“Just having great depth has allowed us to be in this position. Other than the few weeks where we had to put a lot on Hassan’s plate, we’ve been able to have great depth and have different guys step up, whether it’s Blake, whether it’s Donovan (Edwards), and so we’re excited to finally get a chance to see a full-speed Blake Corum,” Michigan offensive coordinator Josh Gattis said.

For Georgia, safety Chris Smith said the knee injury he suffered in practice late in the season and played through against Alabama in the Southeastern Conference championship game is improving.

“I’ve been working with the training staff a lot to be able to get back going on the field and stuff like that. I definitely had a great opportunity to be able to play in the last game, and I’m doing everything I can to play in this game," Smith said.

Smith moved from safety to STAR, a linebacker/defensive back hybrid, against Tennessee and really took to the position. The injury forced Smith back into a safety role with William Poole starting at STAR against Alabama. The Bulldogs' pass defense was a mess against the Tide, allowing 421 yards passing.

The hope is having Smith back at STAR will help Georgia plug the holes.

No. 4 Cincinnati got a taste of what game day is like at AT&T Stadium on Sunday night when the team went to watch the Cowboys play the Washington Redskins.

The Bearcats face No. 1 Alabama in the Cotton Bowl on Friday.

“It was kind of surreal, kind of star-struck,” Bearcats running back Jerome Ford said. “It was crazy just watching the fans and everybody go crazy and actually watching players play. It was pretty fun. I definitely know if I’m blessed enough, I could see myself playing on a field like this in the future.”

Quarterback Desmond Ridder said it was interesting to hear how loud the stadium was when the Cowboys made a big play. It got him wondering just how loud it will be Friday and what the crowd split will be for a neutral site game played closer to Tuscaloosa than Cincinnati.

“You know, there was way more than 50 percent Cowboys fans in the building last night,” he said. “So there were times where there was an interception or a touchdown where this place got loud. And so I’m excited to see how it gets over the (weekend).”

The four playoff teams were scheduled to have at least parts of their Monday practices open to media, but only Cincinnati's workout at AT&T Stadium in Arlington, Texas, was open.

Alabama in Arlington along with Georgia and Michigan in South Florida decided to close their practices, citing COVID-19 concerns. All four teams closed Tuesday's practices.