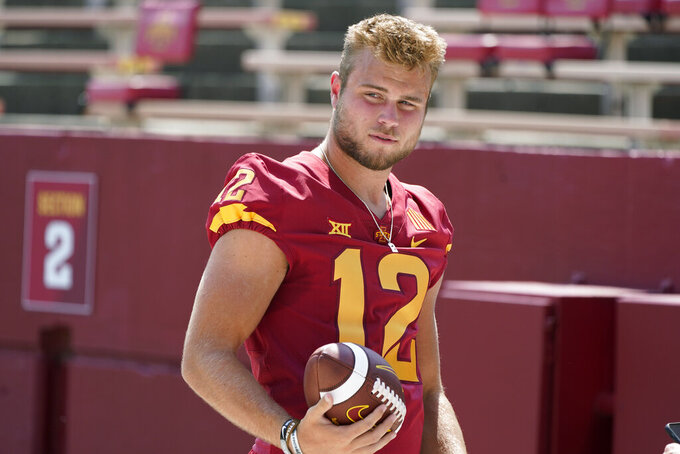 FILE - Iowa State quarterback Hunter Dekkers looks on during an NCAA college football media day on Aug. 2, 2022, in Ames, Iowa. It's been a foregone conclusion since at least the spring that Dekkers would be Iowa State's next starting quarterback. His teammates praise him for his leadership skills and physical tools, and his coach says he's earned the trust of everyone in the program. (AP Photo/Charlie Neibergall, File)

Iowa State opens against against a Championship Subdivision opponent for the second straight year. The Cyclones are looking for a sharper performance than in last year's down-to-the-wire 16-10 win over Northern Iowa. The offense will unveil new starters at quarterback, running back and tight end. Southeast Missouri State is picked second in the Ohio Valley and expected to have its best team since going to the FCS playoffs in 2019.

Southeast Missouri State offensive line vs. Iowa State defensive line. The Redhawks have a veteran front with all-conference picks Nate Korte and Zack Gieg and returnees Terry Cook and Shyron Rodgers. Running behind them is the 5-foot-8, 222-pound Geno Hess, who piled up 1,116 yards and 14 touchdowns and is the Ohio Valley preseason offensive player of the year. All-American Will McDonald IV is the featured player on ISU's defensive line and five sacks shy of the Big 12 career sacks record.

Southeast Missouri State: QB Paxton DeLaurent, who played at NAIA Central Methodist last year, makes his first Division I start. He presents a challenge as a double threat. He passed for 2,499 yards and 25 touchdowns and ran for 553 yards and seven TDs.

Iowa State: QB Hunter Dekkers takes over for Brock Purdy and has gotten positive reviews in the preseason. The left-handed, third-year sophomore has played meaningful snaps in relief of Purdy, and he should have plenty of confidence with two-time All-Big 12 WR Xavier Hutchinson as one of his main targets.