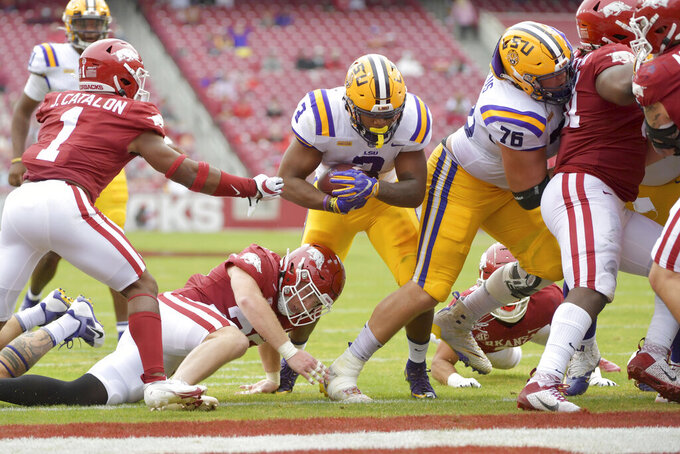 LSU running back Tyrion Davis-Price (3) finds a hole in the Arkansas defense as he runs for a touchdown during the first half of an NCAA college football game Saturday, Nov. 21, 2020, in Fayetteville, Ark. (AP Photo/Michael Woods)

TJ Finley found Jaray Jenkins for a 13-yard touchdown to put LSU (3-3, 3-3 Southeastern Conference) ahead by three points. It was the capper to a 10-play, 67-yard drive on which Arkansas safety Jalen Catalon was flagged for a 15-yard targeting penalty and ejected.

LSU sealed the game when Jay Ward got his hands on an AJ Reed 44-yard field goal attempt with 1:24 left, the ball falling well short of the crossbar.

It was a rare bounce the right way for LSU, which started the year ranked No. 6 in the country, coach Ed Orgeron said.

“We needed a break,” Orgeron said. “These guys fought hard. We finally got us a break. Just a big win for our football team.”

The game turned on Catalon’s ejection. It appeared the freshman, Arkansas’ third-leading tackler, led with his shoulder, but after review, the targeting call was upheld. Arkansas coach Sam Pittman was disappointed after the game.

“Well, I saw, I thought he tried to avoid the hit,” Pittman said. “He was coming in with his shoulder. Their receiver went lower as he was going toward the ground. I felt like he was trying to avoid the contact. I can see what they saw, as well.”

Finley threw for 271 yards and two scores, the other in the second quarter on a 30-yard pass to Racey McMath.

Arkansas (3-5, 3-5) had taken its first lead late in the third quarter when Feleipe Franks led a six-play, 95-yard drive. Reed’s 22-yard field goal early in the fourth put Arkansas ahead 24-20 ahead of Jenkins’ final touchdown.

LSU had the ball for more than 41 of the game’s 60 minutes. Part of the reason was because LSU ran for 148 yards and Arkansas ran for just 104, 29 of which came on a TJ Hammonds carry. Tyrion Davis-Price ran for 104 yards and a touchdown for LSU, his second 100-yard game in the last three.

“They probably looked out there and saw some new faces on the D-line and it felt like they possibly could have a good running game on us and they did,” Pittman said. “They could run it and we couldn’t. That’s probably the difference in the football game.”

LSU’s penchant for allowing the big play remains, but the Tigers are back to .500 with three games remaining, including two against top-10 teams.

Arkansas’ path back to mid-tier in the SEC suffered another setback, following Florida’s dismantling last week. Arkansas had alternated wins and losses every game of the season until Saturday.

Arkansas was limited to just 56 scholarship players for various reasons Saturday, including being short six defensive linemen, which Pittman noted contributed to LSU’s ability to run the ball. Those on the offensive side found a tough go of things, too, as in the second half, every Arkansas possession except its last one started inside its own 10 and the Razorbacks went 0-for-10 on third down.

The Tigers had beaten Arkansas four times in a row on three separate occasions since the Razorbacks joined the SEC in 1992. Saturday’s win marked the first time since that LSU has won five consecutive.

Arkansas will go to Missouri to play the Tigers in a rivalry game for the Battle Line Trophy.

LSU travels to No. 5 Texas A&M next week.