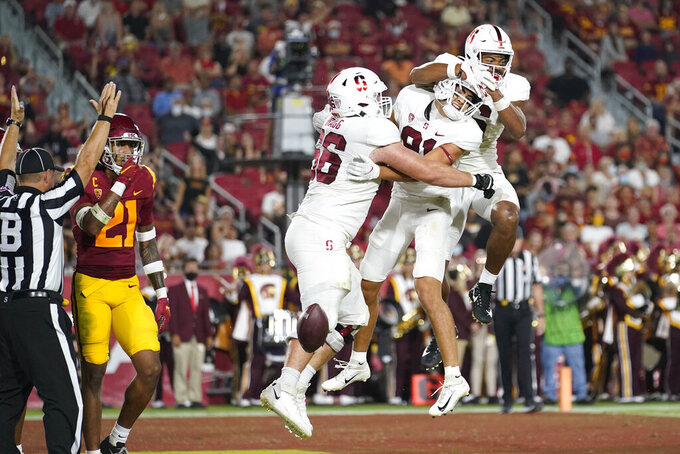 LOS ANGELES (AP) — After Nathaniel Peat broke a tackle and turned the corner, the Coliseum collectively gasped as the speedy Stanford tailback sprinted all the way down his sideline.

“I just saw green grass, and I had to put the wheels on,” Peat said with a grin.

When he finally stopped, his 87-yard touchdown run had given the Cardinal a whole lot more than their first seven points in an impressive 42-28 upset of No. 14 Southern California on Saturday night.

“Guys saw Nate take off, and there were great blocks down the field,” Stanford coach David Shaw said. “It just gave us a lift, and then we got a stop, and we said, ‘Hey, you know, we can play with these guys. And not only can we play with them, we can dominate.’”

The Cardinal did just that in a victory that dramatically altered the early season trajectories of two longtime Pac-12 rivals.

Tanner McKee passed for two touchdowns and rushed for another score in his first collegiate start as Stanford (1-1, 1-0 Pac-12) rebounded from a rough 24-7 loss to Kansas State last week in which the Cardinal didn't even score until the final minutes.

Peat racked up a career-high 115 yards, and Kyu Blu Kelly returned an interception 31 yards for a touchdown in Shaw's 63rd conference victory at Stanford, moving him past Pete Carroll for ninth-most in Pac-12 history.

“It shows who we are as a team,” Peat said. “We have a lot of playmakers and a lot of potential. Last week, we really didn't show who we were.”

McKee went 16 of 23 for 234 yards, and he hit Elijah Higgins and Brycen Tremayne for TDs as Stanford rolled to a 29-point lead in the fourth quarter of its ninth victory over USC in the California rivals' last 14 meetings.

“We saw glimpses of what our offense and our team can be,” said McKee, a Southern California native with about 30 friends and family in the Coliseum stands.

Kedon Slovis passed for 223 yards, while Keaontay Ingram and Darwin Barlow rushed for TDs as the Trojans' (1-1, 0-1) nine-game regular season winning streak ended with a thud. USC committed nine penalties for 109 yards, and Stanford’s defense limited star Trojans receiver Drake London to four catches for 68 yards and a touchdown with 5:54 to play.

Peat's early sprint down the Cardinal sideline was the fifth-longest TD run in Stanford history, but USC evened it early in the second quarter with a 15-play, 95-yard TD drive. McKee put the Cardinal back ahead with a 3-yard TD pass to Higgins on fourth down only after Stanford decided to go for it after USC lined up in the neutral zone on a successful field goal.

Stanford went up 21-10 right before halftime on Tremayne's TD reception, set up by a 49-yard catch by Austin Jones. The Cardinal got 174 of their 248 yards in the first half on only three plays, and USC got light boos from its home crowd heading to the locker room, followed by heavy boos for Helton during his scoreboard interview before the second-half kickoff.

“You hear it,” Slovis said. “You have to deal with it and play. It's college football. It's a serious business, so something that comes with expectations at USC. It's no surprise to all these guys.”

Kelly picked off Slovis' pass when it deflected off London's hands, and the cornerback eluded Slovis near the goal line to score his first career touchdown. The rout was on when McKee scored on a 1-yard keeper late in the third quarter.

“Like I told them in the locker room, you never want this to happen ever,” Helton said. "But when it’s an early one in the season, you can live through it. But you've got to correct it extremely fast.”

The 101st meeting between the Pac-12′s two California private schools resumed a rivalry that was interrupted last season for the first time since 1945 by the coronavirus pandemic.

USC even began the game ominously when kicker Parker Lewis was ejected for targeting on his tackle on the opening kickoff. Alex Stadthaus was perfect on two field goals and two extra points in Lewis’ place.

Stanford: The Cardinal probably aren't as bad as they looked last week against K-State, and they might not be as good as they appeared while racking up all these big plays against reeling USC. Either way, McKee has solved Shaw's quarterback problem after just two games.

USC: Helton's future is once again the hottest topic across the Trojans' vast fan base. Athletic director Mike Bohn has seemed highly unlikely to make a midseason change, but one or two more humiliating losses like this could alter any plan.

Stanford: A long trip to face Vanderbilt on Saturday.

USC: A road opener at Washington State on Saturday.